I gave up my morning run to make pancakes and see the kiddos off to school on their last day before Summer Break. They were quiet and a but fatigued as they ate their pancakes. I asked them what they had planned for the day, and they both shrugged. Rocco had more pep in him.

I told them I’d pick them up from school and we could do whatever they wanted. Ri voted for Jeni’s and Mario cast a vote for the river.

Much to Ri’s dismay, I made her walk to school one last time this year. I snapped shots of her as she left. She was a good sport about it and even gave me a few smiles. I can’t believe how old she looks!

I returned to the house to find Mario’s pancake untouched. Seriously, I don’t know how this kid grows without any nutrients heading into his body. I got on him about not eating and shoved a Z Bar in his bag. It was 7:40 and we had to hit the road if we were gonna walk to his school in time. Rocco was charged to come with us.

We started our descent down 1st Ave. talking about our favorite movies. Fairly soon into our walk, he held my hand. He held it nearly the entire way to school. Kids passed and he kept holding. Little did he know that this small gesture brought me such joy. We arrived to his school and he walked off to finish his last day of 2nd grade.

I picked Ri up at 2:40. All the fifth grade boys had taken off their shirts as an end of the year gesture and the girls were grossed out. They were gagging and pointing at the boys. Hysterical. 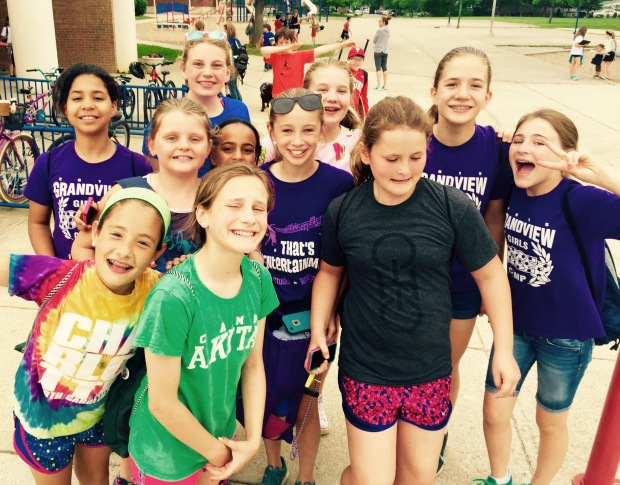 We drove down to get Mario. Ri welcomed him as he walked out the door. He and his buddies wrestled around on the grass and then we left for Jeni’s. I had big plans to bike to the river but the kids wanted to drive. I gave in because Mario had his first baseball game at 6. We parked and walked the bike path to our river spot. Ri, of course, wanted to play her game where she stands on a rock in the river and we toss stones near her to see who can best splash her.

After soaking Ri, we raced each other up the concrete slope. Ri and Mario bickered over who beat who so then we had to time one another. But then they bickered about me not starting the timer on one of them fast enough. Ahh, siblings.

We headed home to see Jon and get ready for Mario’s first baseball game. And Summer begins…!