Maria has innate compassion  and nurturing genes in her body. She has always been a caretaker. When Mario was born, she would beg to give him his Binky or put him in his swing or feed him his smashed peas. I have a ton of pictures – back when you had to develop them – of the two of them together and inevitably, Maria’s arm is always wrapped around Mario. His protector.

In preschool, she had a girlfriend who was petite and quiet. Whenever another child would boss her around, Maria would step in and protect her. The girl’s parents nicknamed Maria “the muscle.”         This weekend, Maria and I were just getting ready to sit down to play a card game. Her phone rang and she left to talk to her friend for a few minutes. She came back and told me that her friend needed to stop by. Within a minute, I heard the door open. Her friend was sobbing; Maria wrapped her arm around her friend, and walked with her down the stairs to her room   continuously whispering “you will be ok.”

Mario did not quite inherit the compassionate and nurturing genes.    That is not to say that he doesn’t care for others; he just doesn’t have that automatic response of nurturing and caretaking.   He expresses his care and concern by trying to make people laugh – by being goofy. When he was in preschool, he would get up in front of all of his friends and perform a crazy dance (he loved Gangnam Style). When one of his friends took a nasty fall while they were skateboarding, he jabbed him with playful jokes to keep him laughing until I arrived to take him home. Last week, I had a crappy day at work     and he amused me with his little quips.

I have made Maria do more volunteer activities with me than Mario. This is partially because the moms of Maria’s friends tend to plan volunteer events more often than the moms of Mario’s friends. It is also because she didn’t put up as much of a fight as Mario did when I talked about doing something for those in need.

Lately, I have been lamenting about not pushing harder on Mario when he puts up a fight about volunteering. He needs to gain some perspective  when he starts begging me for $150 pair of basketball shoes for the upcoming season.  I have told him that there may be a possibility of purchasing such shoes but it does not come without putting forth some effort for others. Accordingly, he has agreed to put together hygiene kits for men at the homeless shelter  along with a few of his friends. We are heading out this week to buy the supplies and then put them together to deliver. It just takes me putting forth some effort to get him to do it.

But I was excited to see him come downstairs on his own last night and read a book to Elena with me. I had mentioned reading to Elena over dinner with him and Maria and Jon last night. I threw in a comment that it would be really nice if the kids or Jon joined me for a chapter or two. They all rolled their eyes.

I situated my computer at the dining room table, and jumped on Facebook messenger with Elena. I was just getting ready to start reading the Weather Fairies book when Mario trotted down the stairs to join me. Elena started giggling like she always does when Mario enters the screen. I gave Mario the parts of Kirsty   to read.

To my delight, he completely acted the part. He raised his voice up a few octaves  to mimic Kirsty’s voice . Elena cracked up every time he read off the page. He read a chapter with us, and then I allowed him to head upstairs to finish his homework. I spent another 45 minutes reading to Elena. I didn’t make her chuckle like Mario had but we did have fun reading about the goblins and talking about the different weather fairies.    

I visited Mario in his room after I finished with Elena. I told him how happy he had made Elena by simply reading a chapter of a book to her. I explained how a simple gesture can mean a lot to somebody.   

I recall telling my dad about taking a walk in the woods without looking at my phone the entire time.      We had been talking earlier in the week about needing to disconnect more often. His response via text was “baby steps.” That phrase came to mind as I left Mario’s room and went to log off the computer for the night.

Jon went hunting last night with the hopes of bringing some deer meat home to his family (I’m just hoping for some of Vicki’s meatballs!).

It was just the kids and I and I had to help out a local non-profit with decorating for a gala tonight. So the kids got to head downtown with me and “work” their little butts off. They had a blast doing it. The gala is at the Vault, which I believe is an old bank converted to an event hall. It has a vault in the back of the hall that provided a secret hideaway for M&M. They loved running around the place and hiding from me. But they also provided assistance putting favors in bags and decorating table trees with red ornaments. They thought placing the plastic red cardinals on the tree was the bomb! 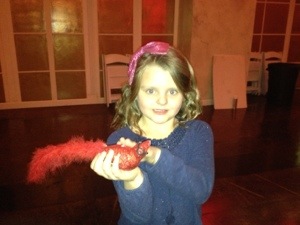 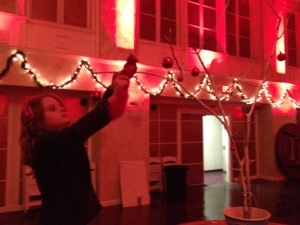 They were polite yet animated and the volunteer crew loved them. I love that I can share with them my passion to help others and they enjoy doing the work with me. I hope I am instilling in their little bodies a life-long desire and passion to care for others. With each project, I imagine their souls expanding to make room for all the compassion, empathy and purpose pouring from their little bodies into the work.

But, alas, they are kids and must mix a bit of childish fun along with virtues of compassion and giving. Mario found Febreeze in the ladies bathroom and thoroughly enjoyed spraying its remnants among the four walls of the tiny room. I thought a cheap perfume grenade had exploded when I stepped in to retrieve Mario but his face said it all – no grenade, only Mario orneriness.