Maria has been begging for a new bed for months. She complains she’s not comfortable in her bed – it’s too hard and too lumpy. I’m not sure when we bought her bed or if we even bought it. It may have been my grandma’s since the headboard and footboard are hers. I can’t remember. In any case, seeing we have had foam pads laid across her bed for months, I figured it was time to get a new one. Besides, she swears she will sleep in later on a new bed….

I took the kids to the Original Mattress Factory down the street on Saturday morning. What a hoot that trip ended up being. The kids could have tested mattresses all day. Mario, of course, pleaded and begged and whined to be able to get a new mattress like Ri because his mattress was horrible, too. Yea, right. Of course, the ones they immediately gravitated to were the most expensive. $2,200 for a twin orthopedic mattress! Seriously? Mario couldn’t leave its side. The salesman, Thom, was a 20 year employee of the store and gave us its history. Maria was fascinated and peppered him with question after question. She loves any kind of history. He even took them behind the showroom doors to let them see where they stored equipment and beds. He was quite the host.

Then he showed me where the more reasonably priced beds were located in the back of the showroom. Now we were talking – $200-350. Of course, after laying on the orthopedic ones, these felt like rocks. Smart move, Mattress Factory. Mario kept jumping from one to another to another. Maria actually laid on a few for a while and soaked them in. She finally landed on one that she felt was the best. It was a pillow top double sided mattress that was not at the low range but not ridiculously high. She convinced me by analyzing the others in comparison to her current mattress and the difference in the pillow top. I tried it out and could feel the difference. But honestly, what drove me to agree was the sheer hope that this gem would have her sleeping until 9 am.

Mario continued to hop from bed to bed while I filled out paperwork for Ri. When I told them we had to go, Mario pleaded for the $2,200 mattress. When I said no way for the tenth time, he distressingly replied “ok, I will take that one.” He pointed to the $1,200 one. I’m glad he continues to believe he will be a pro football player making “$1 million dollars a week” because he’s gonna need it with his taste. 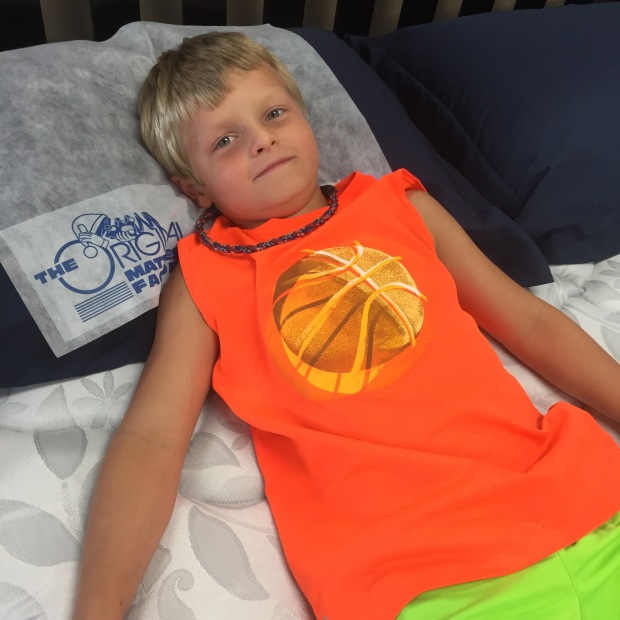