We all love the sight.  We stop cold in our tire tracks to watch the fat mama robin bird skip along the sidewalk, over to the fallen branch, and up into the skeletal tree.  We are quiet.  We gawk.  We breathe in that end-of-winter-spring-is-near air.  We start pedaling again only to be stopped 30 feet ahead to stare at another plump robin.

After twenty minutes of pedaling, we make it to the “church park” (we are blessed with five parks within a mile from our house).  Maria and Mario park their bikes at the corner of the grass and asphalt, and sprint to the jungle gym.  I was so excited because they played on the jungle gym for a whole 45 minutes going up and down the ladder rings and sliding down the tube slide on their bellies. 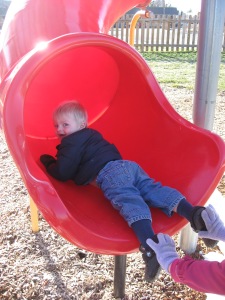 Maria is not one to want to move much so this was great for her.  Of course, she wanted me to participate in the slide action so I had to contort what felt like my mammoth over-sized body into a kiddie tube slide.  Don’t ask me why they enjoyed it because we stopped about ten times due to my elbow getting caught or my knee hitting the wall, but they did.

I felt alive again.  The past few months have been brutal to me.  I cannot stand not being outdoors.  I can handle about an hour in the house before I crave fresh air.  With the 20 degree weather almost all Winter, there was a real lack of fresh air.  So, to have it back after all this time is a pure gift.  I was telling a girlfriend that Winter must have come on so strong for a reason – to remind me to appreciate Spring.

I have high hopes for this Spring – a first family camp out.  My little sister began her camping adventures at age 4 so I figure Maria can handle it.  Mario will not allow her and I to go alone so he will have to handle it by default.  I figure I will have them setting up camp by the end of the Summer as well as fishing, hiking, and making insanely scrumptious s’mores.

Happy to be outside on their bikes!

Yes, we got that sweet taste of Spring yesterday afternoon.

The sidewalks cleared of snow early in the morning, and the sun smeared itself onto the land through the grey clouds above.  It is obvious that Mario has Spring fever – he continues to rip off his pants and pull-ups, and dance around the house half-naked screaming “Naked boy!”  Maria is less obvious in her antics but I know that she is anxious to see the sun and warm days with the way she talks about picnics in the park, swimming at the pool and biking around the neighborhood.

When Maria woke up from her nap at 5 pm, it was still light and a balmy 39 degrees.  We threw on our coats and hats and gloves, and headed outside.  Half way out the door, Maria remembered that she needed her knee pads and her helmet.  I had to give her my bike helmet because she has officially grown out of her Dora one (poor girl has her daddy’s head)!  I grabbed Maria’s bike in one hand and Mario’s plastic big wheel in the other.  I made sure Maria’s bike was in the front because Maria gets very upset when her brother gets ahead of her; she worries that he will go in the street or hit a pothole.  “I need to be the leader so my brother does not get hurt.”

Of course, Mario got irritated with this arrangement at first.  But he felt better after I told him that he was in charge of “saving” Ria if she needed a push from behind.  We trucked it up the street with Maria leading the way in her velvet green dress and white stockings.  Mario did not do a bad job keeping up with her, especially on a plastic big wheel.  When we reached Grandview Avenue, we took turns pressing the walk button.  They ran back to their bikes at my command and we darted across the street as soon as we had the walk sign (this is quite a sight with me running up to push Maria onto the opposite sidewalk ramp and then running back to help Mario get across the street before the light turns green for the cars).

We finally arrive at Panera.

Maria has been concerned with her manners and etiquette lately because of a Princess CD that talks about them all the time.  We ordered Broccoli and Cheese soup and wheat bread.  She placed her napkin on the neck of her dress and picked up her spoon.  She filled her spoon half-way, blew on the soup, and ate it pristinely.  I worried I had an alien daughter for a second but then she asked “Mom, am I showing good etiquette?”  As much as I detest those princesses, I have to give ’em a shout for pushing the etiquette.  It was like eating with another adult. Amazing.

Meanwhile, her heathen brother sat in his chair with a straw in one hand acting like he was shooting bystanders.  After playing that for five minutes, he jumped down from his chair and ran over to the counter trying to play hide-n-seek with the Panera workers.  I scolded Mario for the next 20 minutes about sitting still (worked really well).  I sighed.  Maria sighed.  Then Maria lamented that Mario has no etiquette, and that he really needed to learn some quickly.  I seconded that, and we grabbed him and left to the workers’ glee.

Maria wanted ice cream at Jeni’s but we had to discuss whether Mario should get any because he did not act the best at Panera.  Maria finally made the executive call that Mario should get some but only because we loved him.  Mario has no idea how much that sis of his stands up for him.  We ate our “purple ice cream” (black currant yogurt – yum!) while sitting in our favorite booth next to the picture window.  We love it because we can people and dog watch and comment on which dogs we would want to own and which we think are better left with their respective owners.   We finally finished up and jumped back on our bikes for the ride home.

I saw a glimpse of Mario in his later years on the ride home.  Maria is a fairly careful biker – she pedals pretty good on a long stretch of sidewalk but when the handicap ramp comes she makes a complete stop and slowly goes down the miniscule ramp.  Then she stops at the sister handicap ramp and usually needs a push to get up the ramp.  Then there is speed racer, Mario.  He sees the tiny down ramp and jives up those little legs pedaling as if to get away from a horrid monster behind him.  He soars down the ramp and slides on the pavement with no control.  It jars him and I get prepared to have to soothe him from the scare.  But no, he looks up at me with a smile from ear to ear and pronounces “that was so fun, mommy!”  I can already see him with his buddies coming home every day with a new bruise or laceration.

Spotting the nest above

When we were almost home, Mario looked up in one of the adolescent trees on the street and shouted “Look Mom, bird nest!”  He had spotted a newly spun nest.  We stared at it for a few moments and I commented that this was a great taste of Spring.  “Where are the birds, mommy?” asked Mario.  “They are gathering more twigs to build the nest even bigger, Mario,” I responded.   Maria looked at me and replied “The nest looks pretty good to me, mom.”

Yes, it does, little one.  And Spring is another day closer. 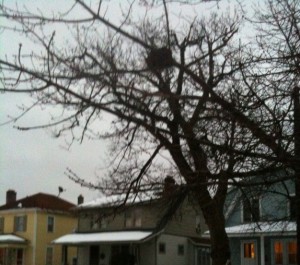 The inspiring sight of Spring