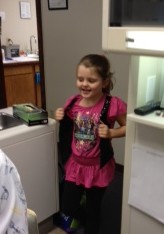 Mario bellowed those words over and over this morning.  I subjected the poor boy to a double dose of fun – the dentist and the doctor – and I am quite sure he will mention the indelible trauma it caused him 30 years from now.  Maria has never minded the dentist or the doctor.  She did not want to leave on her first dentist trip; she kept asking questions to the dentist, and was pumped when she got to take a sticker out of a big plastic tooth.  Today was no different.  She burst into tears at 6 am this morning when I told her we may not go to the dentist because Mario was spiking a fever.

“Mom, please, take me to the dentist.  You can just hold Mario and give him your phone to play with.  Please, mom.”

How could I deny her after that pleading?  I don’t want her to blame me for a traumatic event, too.  She walked right into the back room when the dental assistant called her name. When I stood to ask her if she wanted me to go back, she stopped me.   “I am fine, mom.”  Yet another leap away from needing her mama.  Proud…but kinda sad.

Mario not enjoying the dentist

Mario sat in the waiting room playing on my I-Pad and asking to download every ninja, hunting, or fighting game he found.  When they called him back, he dutifully walked back trying to continue his play on the IPad while walking (he’s my son).  The dental assistant sat him in the chair and explained that she was going to clean his teeth.  He chose grape flavor and all was good… until she attempted to put her hands in his mouth to clean his teeth.  He clenched.  He cried.  He did not want her near him.  I tried to explain to him that she was not going to hurt him in any way but he wanted nothing to do with her.  He pleaded to go home.  He begged me to take him out of the chair.  Horrible.  Sweet Maria looked around the room trying to find items he might enjoy (a picture of a “hot” girl brushing her teeth, a balloon, and my IPad) but nothing worked.  She told him to hold her hand and that she loved him but that didn’t work either.  It was ridiculous!  My tough-man is not so tough at the dentist.

So, if I had not tortured him enough at the dentist, I took him to the doctor right after we dropped off Maria at school.  He usually does not mind the doctor, especially when his sister joins us.  But today, I knew it would be different because he had to get a throat swab to check for strep throat.  My stoic Maria even cringes at the thought of the swab check.  But her worse reaction to it was to cry for three minutes and then open up and get it over.  Mario beat her by far.  When the nurse came towards him with the swab, he innately knew something was up.  She had her one chance to get him but she was too slow and when she stuck it in his mouth as he opened up for her, she must have hit the roof of his mouth and he closed up immediately.  She didn’t get the swab, and there was no way she was going to get it.  He was beyond pissed off at every  medical professional now.  He sobbed, he hyperventilated, he begged to leave or at least “wait until later.”  It lasted an entire fifteen minutes until the nurse left and even then, he laid like a wet noodle in my arms.  Eventually he got back into the IPad but then the doctor came in the room.  Luckily, she was good with him and asked him all the questions that would engage him (who is your favorite superhero, what did you get for Christmas, what is your favorite IPad game).

Nevertheless, when she took another swab out of the jar, he freaked.  There is nothing worse than having your son beg you to help him through what he believes to be a horrid situation and the only thing you can do is put him in a hold-down and be complicit in the horrid act.  But again, this doctor came through and tricked Mario and me.  She asked him to open his mouth just so she could shine a light on his throat (what she did earlier) and then she quickly and precisely jabbed the swab in his throat.  When she took it out, he realized what had happened and looked at me in disbelief.  I praised him like he had just won the Olympics.  When we walked out, he looked up at me and asked “Are you proud of me, mom?”  My sweet babe.  We took a long walk in the stroller and he fell asleep due to all of the trauma of the day.  I stopped and stared at him for a long time.  My doll baby.

All I know is that I am scheduling the next appointment for Mairo on a day when Jon is in town!