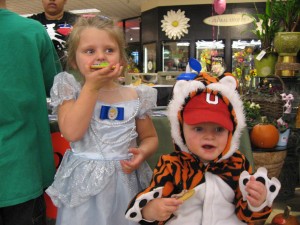 M&M at Krogers (for Halloween): a little better place to run around!

I should have declined.

When my dad told me that he was bringing Grandma Menkedick and Grandpa Bill up to see my little brother in his first OSU play and that they wanted to have dinner with us prior to the show, I should have said “no.” Not because I dislike my Grandma Menkedick or Grandpa Bill.  In fact, every chance I get, I see them. But because my children display the absolute worst manners ever possible when out at a restaurant.

My husband has mini-coronary arrests when we are out because he cannot stand the sight of them running around and acting goofy.  I, on the other hand, do not quite get to that level but I do get frustrated and anxious, especially when older guests are eating with us.  Why? Because 9.9 out of 10 of them do not find anything funny about two children running around the table, climbing underneath it, banging their spoons, and winging table scraps at each other.  In fact, they cannot even hide their disdain.  They either stare at them in disgust or they shake their heads and sport those disappointing faces with the mouth turned down and eyelids half-shut.

Maria and Mario did better tonight than they have in months at other restaurants (may have had to do with Jon and I both lecturing them for the past few days about acting right or taking every privilege from tv to eating away from them!).  Nonetheless, they still didn’t sit still, they still moved chairs and climbed on them, and they still whined about how long the food was taking to arrive at our table.

Grandma Menkedick just chuckles through it all but I heard her true feelings the other day when I called her.  She went on and on for 10 minutes about my cousin’s children and how well behaved they are when they eat with her.  I joked “and mine aren’t Grandma?”   She sat there in silence probably trying not to scream “Hell No!” and then responded with a slight laugh stating “You just have to keep working with them, Mary.”  Nonetheless, god love her, she did not make any comments while this was going on and she did not engage in any head movements or sighs that would make me even more anxious and irritable.  She is an extraordinary grandma to say the least.

Grandpa Bill is pretty good, too.  Although, I still get the feeling that he reflects back to his days raising my stepmom and her brother and sisters and thinks “I would never have allowed….”  But, again, he gives slight smiles and sticks in there as the two crazy children climb on me and dump the salt and interrupt every word I say.

So, again I walked out of the restaurant thinking “no way will I return until the children are 18, if then.”  Of course, I will be back in another week or two with the two of them in tow, meeting grandma or a cousin or a friend, and I will get that anxious and frustrated feeling back as I try to control the two nutballs.  If I was more of a disciplinarian, I would simply put them in the corner or enforce a no tv rule on them but so far I have found that I don’t have it in me.  Nonetheless, I feel the day a comin’ around the corner and when it does, watch out you two – I owe you some!

One thought on “Just Say No”