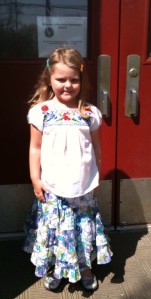 Kindergarten Round Up for Maria

My baby girl,pumpkin seed, doll baby, mama chicka enthusiastically walked through the kindergarten doors last week for Kindergarten Round-Up day.  I ate up her excitement because I had been worried that she would be nervous or frightened about heading somewhere “new.”  However, she has been talking about getting “older” for two years now and dreaming about wearing make-up, having girlfriends to talk about boyfriends, going out to the movies and to dinner, talking on the telephone – you name it.  Not as though these events will occur at kindergarten (or grade school for that matter) but it gets her one step closer to it all.

As she let go of my hand and headed into the monstrous, overpowering kindergarten classroom, I wondered what she would get out of the year to come. What habits would be formed?  Who would her role models be?  Would she make good friends with some great girls?  When would she have her first slumber party?  Would she have an interest in science or math?  Would she continue to be close with me?

I was awakened from my daydreaming by a cheerful lady who asked me to come downstairs with the rest of the parents for a parent orientation by the principal.  The principal was energetic and funny and warm and endearing and quickly made me feel at ease with taking Maria to the school everyday in the Fall.  But because of that, I started thinking about me.  What would I do when Maria was in “school” (not just daycare) everyday and meeting friends and branching out on her own and not “needing” me anymore?  What would I do when I went in and jumped on her bed to kiss her one morning and she yelled “Mom, stop!”  What would I do when she did not beg to go everywhere with me, when she was content with eating dinner on her own or going to the park without me by her side?

I attended a lecture by James Hollis last night.  His lecture grabbed me several times.  But at one point he spoke about the need to be comfortable with ambiguity.  The more you crave certainty, the more you will lead yourself down a path of disappointment, doubt, and frustration.  Fifteen years ago, I would have never imagined I would have married my husband – I swore the first time I met him that he was not the right one.  Two years later, I looked at his big “claw” hands that had turned me off when we first met, and I could not imagine being with a man who did not have those strong, powerful hands to hold me, lift our children, mow our yard.  Six years ago, I was certain that I would not get pregnant.  Fertility did not work, my periods were wacky and non-existent at times, we already had a dog that needed attention.  But then, there she was.  Ms. Maria Grace tumbling around in my belly, poking her feet at my side, making me nauseous at the thought or toothpaste or Tums.  And Mr. Mario, two years later, making me crave sushi (and not being able to eat it) and creating waves across my belly for his older sis to feel.   Thank god there is not certainty in this world.

As for Maria, I told her the other day that I am not sure what class will be like, I am not sure how many people will be in her class, I am not sure about what they do for recess.  Her response was “that’s ok, mom, I will find out when I go there.”  There ya have it – another lesson from my almost 5-year-old!

5 thoughts on “Kindergarten Round-Up and the Certainty of Uncertainty”