Maria and Mario watching the fish at the Conservatory

I love weekends.  Sometimes I dread them on Friday when we have nothing planned and I know the kids will be up at 6:30 am and will likely not nap and will tear up the house and will pee in pants, and will beg to eat bad food, and will talk back to me and Jon.  But then inevitably on Sunday night, I sit down after putting the kiddies to bed, and I reflect on a wonderful weekend.  The past weekend ranked high among weekends where we had the most fun.

I picked the kids up early on Friday and we headed to Devon pool (Grandview has been closed for a week and a half now – ugh!).  Maria is getting better about jumping into the pool by herself and hanging out while Mario and I play near her.

Mario, unfortunately, has not taken to the outdoor pools.  He gets so cold – frigid – as soon as he hits the water, and immediately hops out.  The good thing is that he keeps himself amused outside of the pool by playing with “noodles” as if they were swords, rolling plastic cars along the side of the pool, and throwing his football to me.  He can usually last an hour or two.  I keep hoping that he will get used to the water – maybe if he puts on fifteen pounds.

On Saturday morning, we took off to the library to get movies for our trip to Cincy and then headed to Giant Eagle for a birthday cake for Grandma Lolo.  Maria’s excitement soon turned to depression when she realized that there were no white sheet cakes.  She has convinced herself that she only likes white sheet cake even though she downs chocolate and yellow ones at other birthday parties.  Luckily, there were cupcakes in the aisle beside us that were screaming for our attention since the container contained both white and chocolate cupcakes.  Maria regained her excitement and proclaimed “White and chocolate so you and me can be happy, mom!”

Meanwhile, there was Mario salivating at the muffin case.  “Mom, I want that chocolate muffin.”  The boy is his mother’s son – he would dine on chocolate everything if he had the choice.  I refused his pleads and the tantrum soon started.  He turns himself into a monster, squinting his eyes, balling his fists, and making a “grrr” sound.  He learned that from his sis back in the day.  I have learned to give him one chance to move off of his monster antics and then just walk away.  I had to walk away this time because he really wanted that muffin.  Eventually, he came around the corner to Ri and I, and we left the store for Stauf’s.

I would have to rank sitting at Stauf’s with M&M as one of my favorite things to do.  We talk about the latest paintings on the wall, the people studying, our plans for the weekend, school, friends, family.  Those times take me through my week.  After Stauf’s, we headed home and into the car.  I realized Mario had his “big boy undies” on when we got in the car, and I thought I would give him a chance to wear them all the way to Cincy without peeing (actually, I was just too lazy to go back in and change him).  About half way down to Cincy, he began complaining that his pee-pee hurt, which typically means he has to pee.  I pulled off the nearest exit and veered off the berm.  I whipped him out of the car and into the grass on the side of the road and he experienced his first road side pee. He loved it.

We got to Cincy, changed into our bathing suits, and headed to my mom’s condo pool.

Maria on her "noodle"

Maria, aka “fish”, jumped right in even though the water was absolutely frigid.  She wore herself out by swimming to me (aka going under water and holding her arms out to me), going underwater, and jumping off the side of the pool to me.  Mario, on the other hand, took one step into the pool and jumped back out.  The frigid water was too much for his little body.  He spent the time using the noodles as swords and fishing poles.   He also made his monster faces and pushed me into the pool when I got close to the edge.  We broke for a snack of cheese-its and apple juice.  Mario found his new favorite food in the cheese-its.  He went to town on them.

Mario chillin with his cheese-its

After the swim, we went to Aunt Julie’s house to pick up her two pups, Butters and Willie, to take them on a stroll.  The kids love to take them for a walk around the neighborhood, and have learned how to pull at their leashes to make sure they heed to their commands.  When they returned, they went to Julie’s basement to play with her doll house while we got to actually talk without being interrupted.  It was comical listening to the conversation between M&M playing with the doll house.

Maria: “Can you help me put the baby to bed.”

Maria: “What do you want from the store.”

Yeah, pretty much a day in most couples’ households!  We got treated to a delicious meal of grilled hamburgers and macaroni and cheese and beans (yeah, we are easy to please!).  We re-named Maria the Indian name “Little Bites” in order to push her to take small bites (she ripped into the burger and macaroni like she was amongst fifteen starving ravages who were going to take her food unless she got to it first).  Mario, on the other hand, had to be force-fed three bites of macaroni and two bites of hot dog.  We hit the road back to Columbus at 8:30 and for once they both passed out before we got home (usually one of the two if not both of them stay awake the entire trip).

On Sunday morning, we got up and found that we had no pancake mix.  That is a travesty for Sunday morning because Maria and I are used to cooking up pancakes, eggs and bacon for us to eat (Mario helps stir the eggs but refuses to eat our meals).  So, they jumped in the stroller in their nighties and we strolled up to Giant Eagle.  On the way back home, Mario fell asleep (another rarity) so we decided to scrap the pancakes and go for the real deal – donuts!  We headed to TIm Hortons for two timbits each (I do set a limit!), and then back up Grandview home towards home.

Maria and I had made the executive decision to head to the Conservatory while Mario slept on the trip.  Therefore, when we got home and Mario awoke, we got dressed (it takes a solid fifteen minutes to get dressed since Mario now likes to dress himself and he takes FOREVER and all clothes are always on backwards).   We headed to the Conservatory at 10:45 am.  While we were buying our tickets, a volunteer mentioned that butterflies would be released at 1 pm.  I immediately dismissed the event because I did not think there was any way that we would make it over 2 hours.  However, my children never cease to amaze me. 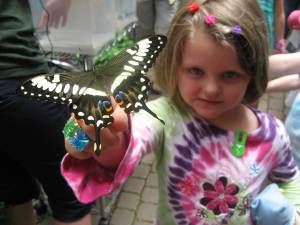 Maria and her huge butterfly

It got a little dicey around 11:45 after we walked through all the rooms except the butterfly room (the Pacific Room) and they started to whine that they were ready to go.  But then came the Gift Room with all of its fun toys and a volunteer who asked us if we wanted to see him release a few butterflies outside.  The first one he released landed on Mario’s finger and he was hooked.  He held that butterfly for ten minutes until it finally got up the nerve to break free.  Maria eventually got one to perch on her finger and we learned all about butterflies from the volunteer.  It was such a tender moment.  When we came home and Mario talked about the butterflies, he recanted the words of the volunteer “And you cannot touch the butterflies’ wings because they are like paper.”

We spent a half hour out in the garden area looking for the three butterflies and trying to catch them.  It was a good preview to the Pacific Room where there were scores of butterflies fluttering around us.  The kids ran after them, leaped to try to catch them, pointed when they came close and shouted “take a picture, mom!”  They amazed us with their coloring and patterns.  We stayed in that room for over an hour admiring the creatures.  I could not believe it.

Mario and his favorite butterfly

We arrived back home for a lunch of hot dogs, cottage cheese and grapes (I should say the kids came home to that – I came home to ice cream and animal crackers).  Mario went down for a nap and Maria and I headed to Mirror Lake on campus to see Uncle Jack in the play Romeo and Juliet.  He played the Friar.  I strategically planned to get there after about half of the play was over because I knew Maria would get antsy.  It worked out well because she started to get antsy in the last few scenes but she still remained interested asking questions such as why Juliet was sad, why Romeo killed himself, why Jack looked mean.  Great play to take her to, heh?!  She was enamored, as always, with Uncle Jack.  She got to go up on stage afterwards and play out her scenes.  I even gave her a line to deliver and she did it with an uncanny ease.  If there is any profession I could see her in at this moment, it is acting.

Mario joined us after the play was over for a little fun at Mirror Lake.  We disturbed the ducks and we threw rocks and we got snacks and we sat on the rocks together.  It was pure bliss. 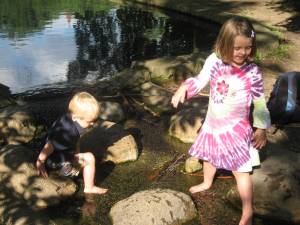 And that was it – our weekend in a nutshell.  By 9 pm on Sunday, I was exhausted.  My bones ached.  My mind felt like mush.  How wonderful it all was!