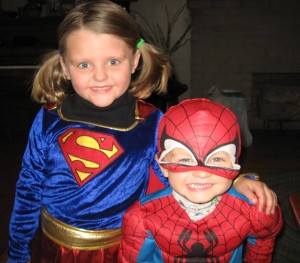 Maria and Mario love Halloween as much as their mama loved Halloween as a kid.  Our Halloween was held on Sunday, the 31st.  Most other neighborhoods held their Halloween on Thursday, the 28th.  When I realized this, I immediately came up with a plan to stroller to the adjacent neighborhood and hit a few homes on Thursday.  Jon stopped that nonsense.  “Mary, give me a break – they will get too much candy on Halloween night – you do not need to go out Thursday, too.”  In my heart, I knew that.  However, in my competitive head, I didn’t care.  It wasn’t that I thought we really needed the candy (that is the farthest thing from what this family needs) or that I would eat it all up (which I would if in front of me – another farthest thing from what mom needs!) – it was simply that we had the opportunity to go out and collect free things (candy in this instance, and an occasional set of fangs) and I wanted to take advantage of it!  I was the same way as a young girl dressed up in my crayola crayon costume or my ghost costume.  I would walk around the neighborhood until my legs felt like they were encased in cement – tired, heavy and slowwww.  But when I got home and flipped over my pillow case – heaven on earth.  Reese’s, Snickers, Heath, Milky Way, KitKat….

Ready for the Haunted Hayride and festivities...

Rather than head to the adjacent neighborhood, we went to our neighborhood park for a Haunted Hayride and Halloween goodies.  They had four large card tables full of chocolate candy, cookies, chips and cheetos, and hot dogs.  My children could not get enough.  Maria dived into the cookies like they were being discontinued, and Mario ripped into Kit Kat bars like he had never eaten in his life.  It was impossible to monitor the two of them, also, because each of them had me at different places at different times (part of their plan).  Of course, here I am spouting off about how much candy they are eating and telling them to stop as I rip open my third snickers and take a big bite.  Like mother like daughter and son.  Neither superhero won the costume contest.  My girlfriend’s daughter won as a pink flamingo and a boy we didn’t know won as a Mad 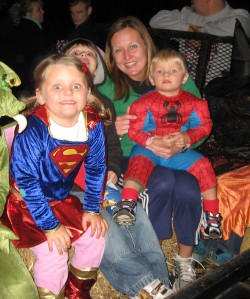 Returning from the hayride (Mario is still shaken by ax-wielding boys!)

Hatter.  Maria was upset – Mario could have cared less unless it meant he would be forbidden from the candy.  Maria could care less about winning in sports but when it comes to contests related to costumes, drawings, guessing games, she is serious.  We took a hayride around the park, which was not too scary (there were two little guys at the end holding fake axes that scared Mario a bit) but provided great entertainment for me because Maria sat next to her Kindergarten buddy, Jason, and bugged him the whole time by sitting close to him, getting in his face, and snuggling with him.

Maria’s Halloween night left her with a basket full of treats and some good times with her friends and cousin.  In past years, I have held her hand and we have gone to a dozen houses before she looks at me and pleads “let’s go home and eat our candy, mom.” This year, a completely different girl emerged.  She walked over ten blocks, saw friends from school that she embraced and talked to, walked up to houses by herself and said “thank you” after getting a treat, and acted goofy with her cousin during the entire trick-or-treat event.  I even caught her looking at people differently than she has in the past.  She really studies them now.  Both girls and boys.  She will catch something on them or about them that fascinates her, and she will just stare.  She looks to be in deep thought processing why the person is acting a

Maria and her cousin

certain way or looks a certain way.  It is much more penetrating and more sophisticated than her stares in the past.  I walked the last block home holding her hand and her cousin’s hand thinking about how lucky I am to be able to experience the excitement and raw pleasure that these two five-year-old girls have for this holiday.

Mario just wanted to eat his candy.  We went to about ten houses before he looked at me and demanded to eat a piece of candy.  I told him he had to wait until we got home and without hesitation, he was ready for home.  It was as if he knew that after he ate his candy that night, he would likely never see his basket again (Jon wants it out of the house so I stash t in secret hiding places for me and to calm the kiddies when I need to do so).  He got just the amount

he could eat that night with a few extras for the grandparents (he knew his mom and dad would require him to give a few away to family).  Calculated little fella.

So, another Halloween over.  Maria brought home a craft from Daisies this afternoon.  It was a paper turkey for Thanksgiving.  Hard to believe that it is only three weeks away.  I catch myself saying that every year but every year it seems even harder to believe how the time flies.

M&M getting ready for bed after a night of Halloween fun!