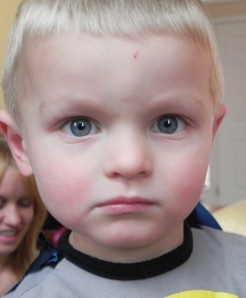 Mario in his sullen holiday state!

We have had Mario for three nights and two days without Maria Grace.  I had reached my tipping point with Mario three days ago when we were at my uncle’s house for Christmas – Mario had gripped onto me like a baby monkey throughout the holidays, refused to go near my grandma and give her a holiday smooch, threw tantrums over eating anything remotely healthy, demanded to only wear his batman costume to family dinner, and cried hysterically when Jon buckled him in his seat rather than me.  Now, it is as if some mysterious spirit – knowing that I was about to boil over and melt down – released a bolt of sweetness and goodness into my son.  He has been significantly better over these last two days.

I think he merely needed a break from his sister – he needed that only-child-attention that Maria got for 2.5 years.  He snuggles with Jon and me; he sporadically kisses us; he tells me he loves me out of the blue; he plays quietly in the tub with his Spidermen for a half hour; he reads books with me.  Now, it is not all bliss – he still has had his episodes of irrationality (especially when it comes to getting dressed – he continues to think all of his jeans make him look “fat” and none of his shirts fit properly) but they are outweighed ten-fold by his episodes of kindness. 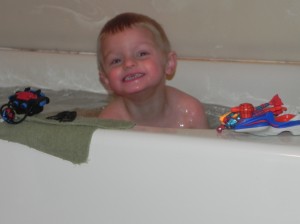 I think three-year olds need that extra attention – need that reassurance that you are watching them perform that gymnastic move or sing that goofy song.  And when there is a five-year-old to compete with for that attention, it is quite difficult to get it.  They may get a five-minute piece of attention but then they need to give it up for another five minutes while the five-year-old performs.  Whereas when that five-year-old sibling is gone, holy cow, they have the spotlight for what to them probably feels like years (and to the parents can also feel like years, especially when you are watching the twentieth spiderman jump off the bed).

Maria will return home tomorrow, and her return excites me because I have missed her.  But there is still a tiny part of me that just wishes she could stay at grandma’s house a while longer so that I can continue to bask in this new-found son of mine.  I have gotten rather used to being told “I love you” and being smothered in kisses all night.