We went to the annual Family Fun Fest today for the second year in a row (the picture to the left is of M&M after getting their face painted like cats last year; despite their looks, they did have a blast!).

Once again, I left more exhausted than I am after a ten-mile run.  The middle school gym is filled with frantic kids trying to get to every game and activity in the place.  There was the annual toilet paper throw with boarded up toilet seats as the target; the coconut roll; the duck pond; and the basketball free-throw zone.

The b-ball zone was Mario’s dream come true.  He would not leave it.  Luckily, the male volunteer in charge of that game took a liking to little Mario and let him take a few shots in between other contestants taking their shots.   He stayed in that one area even though there was a bouncey house, a football toss and the almighty toilet paper toss nearby.  Maria and I were cracking up.

Maria did not surprise me with her actions at the fair.  She is like clockwork.  She walked in and immediately bolted over to the sand art (putting colored sand in a plastic figurine necklace).  Next, she moved to the painting exercise but it had a line so she quickly moved on (she has her mother’s patience).  She headed over to the cupcake and cookie table and checked out the goods.  I had my eye on her knowing what was to come. 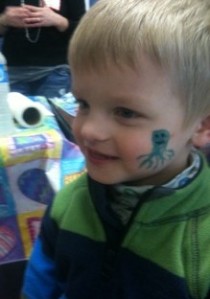 Mario at the fun fair with the green octopus he chose!

“Mom, can I get two snacks; I am so hungry.” Of course I give in justifying that it is a festival after all.  She chooses the purple cupcake and iced cookie.  Mario nabs a brownie, and heads back to the b-ball game.  Maria shuffles to and from a few games for about ten minutes, and then asks for another snack.  “No way, you have to wait a little longer.  We’ll get a hot dog in a bit.”  She finds a friend soon thereafter and they go in the bounce house together and run around the gym.   I am finally able to drag Mario from the b-ball game by having the volunteer pretend that they are closing up the game up for the day.  He helps me put away the balls and holds off the other kids until Mario and I are out of the door.  God love him.

We found the face-painting area on our way out.  Maria chose an ice cream cone and Mario chose an octopus.  Mario spent five minutes after the painting admiring his octopus in the little mirror they gave him.  Maria told me she got a chocolate ice cream cone just for me, and then added “Now, can we get a hot dog or a treat?”  She knows how to reel me in…

We went to the food table and they were sold out of hot dogs.  Maria glared at me with tears forming quickly and shouted “It is all your fault – we should have come over here when I first asked, mom!”  I attributed the outburst to half exhaustion and half a longing for festival food.  As I stood there trying to help Mario put on his shoe, she spotted the cupcake table.  Her anger at me soon ceased.  “Mom, may I please get one more snack since they don’t have a hot dog?” Sweet as can be (she really does know how to work it).  I bought her a small cookie.  Mario refused any more sweets because “they have a lot of sugar which won’t make me grow.”  Jon and I have been telling him this so that he will eat more veggies and fruits and every once in a while it works.  Rather than worry about food, Mario beamed at the sweat that he had built up from playing basketball.  “I look like you mom after you come home from a run!”

Maria with her ice cream painting.

We strolled home in the light drizzle without saying a word – the excitement of the fun fair blowing us away for a second year in a row.