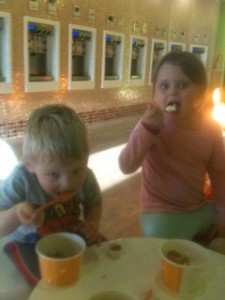 Grandview got a new addition to the neighborhood – a frozen yogurt shoppe called Orange Leaf.  The sign had been placed in the store window for months before it opened and Maria and I continuously eyeballed it every time we walked past to go to Giant Eagle.  After months or anticipation, the shoppe opened without much fanfare on a weekday night.  The walls are a bright lime and the seats and tables are white and orange.  They have a pinball machine that is free.  Mario’s favorite.  They have over ten different flavors to choose from but why anyone would get anything other than Brownie Batter and Peanut Butter is beyond me.  I am still appalled that my own daughter gets vanilla out of all the flavors to choose from!  And, all of the yogurt is either non-fat or low-fat.

What else can that remind you of but the Seinfeld episode from back in the early 90’s where Elaine and Jerry fall in love with frozen non-fat yogurt until they notice that they are gaining weight.  They test the content of the yogurt after Elaine’s boyfriend notices that she is gaining weight, and discover that it has loads of fat in it.  This has got to be the case with the yogurt at Orange Leaf – it is just too good.  Or maybe the fat enters the picture when you dump a pound of Butterfinger and crushed Snickers into your yogurt dish.  Just maybe….

Our favorites: Maria gets vanilla wafers and graham crackers on her vanilla yogurt; I get M&M’s, butterfinger, oreos and/or snickers; and Mario gets plain chocolate yogurt with no toppings.  All I can say is that this Orange Leaf shoppe is going to be very dangerous this Summer.  It is only a few blocks from our house.  The only deterrent is that it can be costly.  Maria inevitably puts a load of yogurt in her cup (the other down side is they only have one 16 ounce size which is huge for a five-year old kid), and, I can’t help but load mine up because I always seem to go there after a hectic day (which is more or less everyday!). 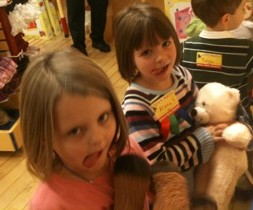 The gals being silly

It has already become the “after school” place for kids to go.  When we visited yesterday with Alana (I picked the girls up from school and left work early), there were 20 middle school kids in the shoppe spending their parents’ moolah on gummy bears, coconut yogurt, sprinkles and skittles.  The owner had a big ol’ grin on his face thinking about this profitable trend.  I can just picture Maria in that shoppe after middle school making her yogurt sundaewith her girlfriends talking about her teachers, boys, and oh, who I am kidding, more boys…!  Mario, on the other hand, may hit the place after the last of his three ball games. 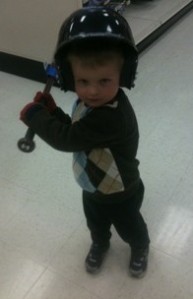 Mario ready for the season