Mario and his stylish hair and outfit.

Mario loves to weigh himself.  Nearly every night he scoots out the scale and steps on it waiting for Jon or I to call out his weight.

“Am I bigger than Maria yet, mom?”

“Almost, Mario, almost.”  Maria glances over at me from her perch in the other room and rolls her eyes at me – she knows I say this to him because he does not want to hear the “no.”  He loves to run around without his shirt flexing his “muscles” – he has such a small frame that even a tiny thread of muscle bulges out because of the lack of fat on the boy.  I have never met a boy who is so worried about his appearance.  Every morning he continues to fret about the length of his pants, the tightness of his shirts, the length of his socks.  He wears the same three shirts and same three pairs of sweats throughout the week.  Every once in a while I can get him to wear a pair of jeans or a pair of overalls because I can remind him that Peter Parker wore them in one of the shows we watched but it only lasts a day and then he is back to his sweats and three shirts.  He likes the sweats because the elastic fits his waist perfectly.  Jeans are too big around his waist and belts don’t fit right because he hates how the strap hangs down from the loop, if only a little bit.

Mario is also fanatic about his hair (like his daddy).  For months, he refused to allow anyone to “mess” with his hair.  It had to be smoothed down on his head at all times, and if anyone tousled it, he would let you know how he felt.  A few days ago, he was playing Wii (his favorite indoor activity), and he decided that he wanted a different “guy” on Wii.  I had not known that you could change your character on Wii – you can set his eyes, his hair, his mouth, and even his nose.  He created a guy who could be described as nothing other than a mad Chinese lunatic with spiked hair.  He thought he was the coolest lookin’ guy ever.  This morning, he woke up and we played around upstairs.  He loves to wrestle as soon as he gets up and every once in a while I have the energy to do it at 6:45 am.  Today was one of those days and he was charged up.  I finally wore him out and he agreed to get dressed.  As he was getting dressed, he asked if I could spike his hair like the guy on the Wii game.  I about fell over on the floor.  I grabbed some gel and the hair dryer and we went to town.  He loved his new “do” and exclaimed “Mom, I look so cool!”  When we got downstairs, he stopped in the middle of the kitchen and shouted “Mom, I need sunglasses with this hair!” 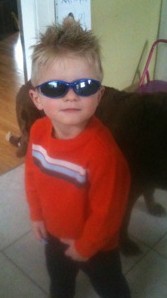 We got him the sunglasses and strolled out the door lookin’ like Hollywood movie stars (well, at least one of us…).  After I put him in his car seat, he touched the top of his head.  “Is my hair standing up still” he asked.  I replied that not only was it standing up but it looked fantastically cool.  He flashed a long, proud smile at me.  When we walked in to school, he held his head up in case people could not see him.  Teachers made comments about how awesome he looked, and he simply walked by them with a coy grin plastered on his face.  When we made it down the hall to his room, he turned back to me and confessed “I am getting big mom, I have spiked hair.”  I agreed with him but gave my usual response: “You are getting big and I won’t let you turn 4!”  He gave me his typical response: “Even when I am 4, you can still call me your baby.”  With that, I scooped him up in my arms and walked him into his classroom.

One thought on “Mario’s great concerns – clothes and hair!”