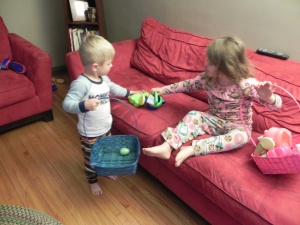 We stuffed ourselves on Saturday.  Absolutely stuffed between the corn casserole, the brownies, the potato salad.  So, what else is there to do but continue the gluttony on Easter Sunday?  The kids woke up in a bit of a stupor from our long day on Saturday but within about eight minutes, the day hit them.

“Is it Easter?  Did the Easter Bunny come here? Are there eggs downstairs?”

It had rained all night so the back yard was soaked.  Jon kept the kids in bed while I ran downstairs to hide the eggs and put out their baskets.  I had done the baskets Friday night knowing that I would be exhausted Saturday night.  As I was placing the last few eggs on the bookcase and piano, the kids started shuffling downstairs asking if they could begin the hunt.  They found their baskets in the corner of the dining room – Maria screamed when she saw Justin Bieber stickers and Mario jumped around the room when he discovered mini transformers.  Maria moved onto the “hidden” eggs (not so hidden when you are talking about three rooms downstairs with very little furniture) and found all of her eggs within two minutes.  Mario took his time on the eggs front because those new transformers were way too enticing.

After the hunt came the best part – opening each egg to eat up the contents.  I had packed Maria’s eggs full of skittles, gumballs and NERDS (she enjoys those sweet candies like her Aunt Sarah).  I packed Mario all chocolate – M&M’s, snickers, and reese’s (he is his mother’s child).  Everytime Mario looked away, I snatched another chocolate. 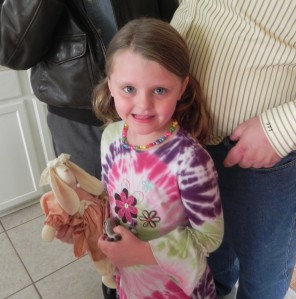 Jon’s parents and brothers came over at 11 am and we headed to brunch at Bravo’s restaurant.  The kids hung on their  cousin Peter, the entire time.  They were fascinated with him (age 16) just like they are with their Heile boy cousins(age 16 and 17).  Luckily, Peter is about as low-key as the Heile boys so he allowed them to climb on him, lead him through our house, and show him their toys.  When we returned home, Mario begged to play Peter in a game of b-ball on Wii.  While they played, the gals (Maria, Patty, Debbie and me) walked to Giant Eagle to grab a bag of ice.  We talked about Jon’s dad, about moving to Columbus, about kids.  It was nice to break away and have that alone time together.  Maria did a good job walking with us and listening to us talk – she is getting more mature in that arena lately.  She used to butt in every two seconds in the past but now she enjoys listening and adding in her two cents when she sees fit.

When we got home from the store, Mario had moved the men to the outside to play “live” basketball. He showed us his dunks while Maria came out and showed us her new sandals.  I had taken her there to get me a pair of gym shoes.  When we walked in, however, Maria immediately dragged me over to the high heels section.  She selected about three different heels that were over an inch high and that I have only seen in the movies on prostitutes.  She loved them.  To her despair, I moved directly to the gym shoe area.  I led her to the girls’ shoes and soon she returned with a pair of black heels on her feet.  They almost fit her perfectly, and she begged to purchase them (I am so hoping that this a phase that ends by the time she is 7).  She chose about 4 other shoes before she came out with the turquoise sandals, which we finally agreed upon. 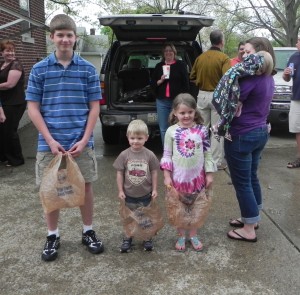 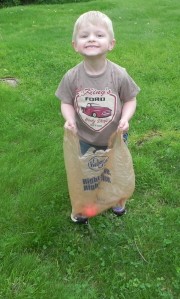 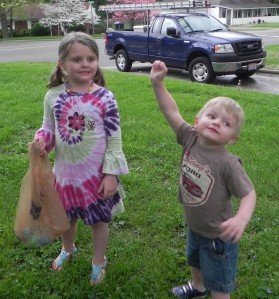 After chowing down on Patty’s awesome chocolate chip cookies and turtles, we hit the road for the Heile soiree, aka the Madhouse.  Poor Jon is still not used to the ruckus that inevitably occurs when us Heile women get together but he continues to hang in there be the good sport that he is (typically sitting off in the corner with my uncle to talk about hunting).  My darlin’ girl cousins love on Maria and Mario picking them up, squeezing them, kissing them and giving them raspberries all over those round bellies – just like the treatment I received from my aunts when I was little.  Maria relishes in the time that she gets with her second cousins (who we call aunts just because second cousins seems way too distant).  They include her in anything they do which included this holiday sitting on the back of my uncle’s truck listening to music and chatting about boys, clothes, friends, and shoes – right up Maria’s alley.  Mario has made the conscious choice to turn his attention to the boy cousins because they spend their time playing basketball.  He hangs in there with ’em trying to make a shot even if the net is ten times his size.  One day he will show them all up. 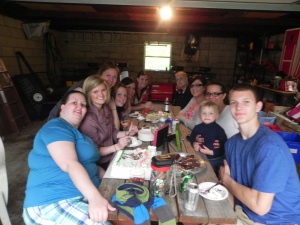 We chowed down on more ham, more potato salad, more deviled eggs, and a new twist – baked beans (a Heile tradition)!  Dairy Queen ice cream cake for dessert, too.  Pure heaven.  We had our traditional easter egg hunt that used to be at least 9 kids strong but that was before all of the cousins grew up and turned into 20 somethings.  Now we only have four kids participating – Maria and Mario, Baby Grace, and Konner.  Everyone wants to get the $5.o0 egg each year, and although all the kids get the same amount of eggs each year, it is still a race to get your number the quickest.  Maria got all nine of hers and Mario only had 8.  Konner had 7 and Grace was finished.  Everyone was helping Konner and Mario find the remaining eggs.  One of the cousins found one and called for Mario to race over.  Konner started heading that way, and Maria tackled him to the ground in order to help her baby brother (the reason she gives at least).  When it comes to eggs, they go to no lengths to help each other.  Baby Grace ended up with the $5.00 egg for a second year in a row much to Maria’s disappointment.  Maria had a major breakdown last year when Grace got the egg; this year we had a talk about how to act if Grace won (be graceful and grateful that she won because she is a baby and needs diapers!) and indeed, she took the $5.00 “loss” like a champ. 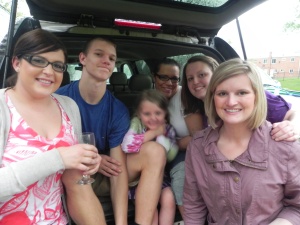 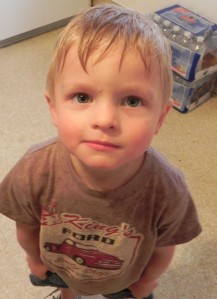 The rain started to grow heavy after the hunt, and the party moved indoors except for Mario and the boys who continued to shoot in the steady downpour.  Mario walked in the house fifteen minutes later sopping wet and completely uncomfortable.  “Mom, take off my shoes and my clothes.  I am all wet and need to be dry.”  He could not stand being wet, and refused to put his shoes back on throughout the night.  He did enjoy running around the living room in only his undies.  Maria again used her tackling skills to get him under control and move him back into the bedroom to get dressed.

We left the Heile house with cousin Maggie in the car (hitchhiking a ride back to Columbus) and Madagascar on the movie screen.  Maria lasted about 30 minutes before crashing.  Mario and Maggie hung in throughout the trip home.  We unloaded all of the easter treats in the house and I spent 20 minutes picking through easter candies to eat promising myself that the candy remaining on Monday morning would be given away at work.  Of course, I sit here tonight eating a reese cup and a chocolate bunny swearing that I will get rid of the candy tomorrow.  Yeah….