We woke up last Sunday morning and engaged in an old ritual – donuts from Tim Horton’s.  The kids were able to wear only their nighties as we strolled down to the donut shop.  They have not been able to do that for eight months.   We decided as we chowed down on our timbits that we would head to Battelle Darby Creek in the afternoon.  The kids went there with their Peepaw earlier in the week and loved it. 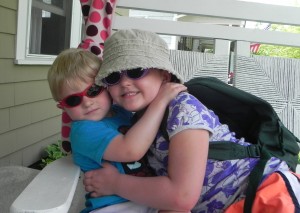 Lookin' good for the creek

As soon as we got home, Maria and I stuffed our backpacks full of random eats, water, and towels.  The kids wore their bathing suits under their clothes with the hopes we could get into the creek.  With all of the rain, I was worried that it would be too swollen and rushing.  With sunglasses and sunscreen on, we hopped in the car and headed west.  The creek was only 20 minutes away and as we pulled up, Maria shouted “this is where we parked with Peepaw.”  My dad knew she would remember everything when I asked him for directions, where to park, and where to enter.

We hit the Overlook Trail first because it was only about 600 feet total in length.  We learned about the glaciers that used to inhabit this part of Ohio and how they created the valley we saw below.  Later in the trip, Maria asked “can we see the glaciers?”  Our next trail expanded further.  While we headed down the wood steps,

Maria yelped.  She was just ahead of me and Mario was ahead of her.  When I glanced down at her, I saw a dark-colored snake slithering over the side of the step to the woods.  Mario was so upset he did not spot it.  Unfortunately for him, he does not have quite the eagle eyes that Maria has inherited from her dad.  I congratulated Maria on her keen eyesight and she smiled at me.  But when we got to a little pool of water, she refused to put her feet in for fear that a water snake would “kill her.”  Everywhere she stepped, she looked around her to ensure there were no snakes slithering her way.  Mario was hilarious trying to calm her down “Maria, mommy will protect you.”  “Maria, you don’t have to be scared; just throw a rock at a snake and it will go away.”  “Hold my hand Maria, I have you.” 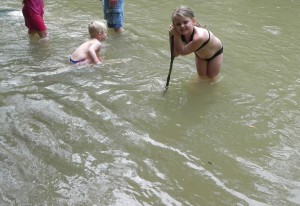 Maria braving the waters and Mario being way too daring!

I started to fret at the thought of having her be too scared to ever want to go in the woods again.  One of my favorite activities with the kids and that darn snake would ruin it.  But, my girl came through after we left the pool of water.  We went back to put on our shoes and clothes and keep down the trail.  Maria complained of being hungry and not wanting to see a snake but then we found a small hill that led to a gentle opening to the creek.  A family stood in the water.  Mario threw off his shoes, and ran down the hill to the water.  He picked up a stick and stood calf high in the creek.  Maria hesitated, and I held my breath, but then she walked down the hill and stood in the water with Mario.  There were two girls and a boy in the water with their mom and dad and the two girls were sitting on rocks in the water and laying on their bellies letting the creek water push them around.  That is all Maria needed.  She moved closer to them and tried it out, too.  Before I knew it, I was warning her to not go too deep.  She was cured of her water snake fear.  Mario spent the entire time using his stick as a sword and a water splashing tool.  Happily, he did not use it to hit anyone in the family next to us. 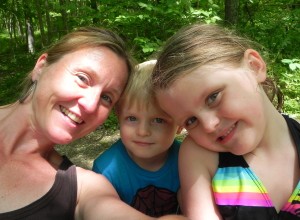 Self-timed shot after chowing on lunch

After 30 minutes in the creek, we stepped out to eat lunch on the hillside.  If I was a poet, I would have had everything I needed to write a famous poem while sitting at lunch with the kids.  As we ate our pretzels and cereal bars and cheese and crackers, a Mexican mother and four young kids arrived and jumped into the creek.  They exhibited pure, unadulterated joy as they splashed around in the water and the mom laughed while taking pictures and talking in Spanish to them.  Joy is universal.  A centipede moseyed up the tree in front of us – Maria, of course, pointed him out to us.  “Really?” I thought as I laughed about how perfect the day was turning out to be.

We were pretty exhausted when we walked out to the car (after a jaunt on the playground that has a small climbing wall – both kids scaled it like pros).  Mario wanted a movie but the movie he had chosen for the ride out to the creek was horrid – massive killing and blood.  I guess we didn’t read the rating on the movie box even though it was a PG movie and still contained all of that nastiness.  Mario was livid when I took it out on the ride over; Maria felt so bad she told me she would close her eyes and sing so that Mario could watch it.  Instead, she got to hear Mario cry and scream for 10 minutes until I said “Look at the cows out the window” and that little mind went from pissed off to amazed at the sight of bovine grazing in the field. 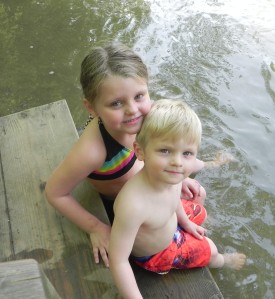 I really wanted a McDonald’s diet cooke and small fries and quiet for a half hour so I went all out and stopped at Giant Eagle to see if they had a movie to buy (yes, desperation!).  Besides, we needed a new movie to add to our repertoire.  Of course, they had nothing less than $24,99 and as much as I was tempted to go for it, my practical, money-conscious self could not do it.  On the way out, we saw a Red Box Video.  We see people at those boxes in Grandview all the time but we had never made the dive to do it ourselves.  We went for it and rented Toy Story 3 for $1.00.  By the time we got in the car, buckled up, and turned it on, Mario was passed out.  Maria hung in there with me but sat quietly watching the movie while I enjoyed the quiet ride home with my salty french fries.

What a marvelous, awesome afternoon.  I have thought about that afternoon almost every day this week, especially when I started to get irritated with a colleague or a work situation.  I remember Maria lying on her belly in the water or Mario trying to skip a rock and they at the least made me smile and at times, even helped produce a significant attitude adjustment on my part.  Nourishing moments for the soul.