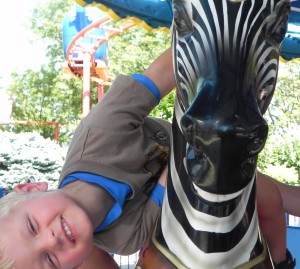 We tore up Kings Island yesterday!  On Wednesday, I watched the weather report for the rest of the week.  They called for beautiful weather on Thursday and Friday and storms all weekend.  Maria starts school this coming week and I had been wanting to do something special with her for the last week.  I pulled up Kings Island’s website and took a look at the rides.  I debated back and forth on whether to take the dive.  I finally called my girlfriend who has a Season’s Pass and asked her what she thought about taking M&M to the park.  She sealed the deal when she told me she had coupons for $20 a person to get into the park (normally $59 and $39).  Now was the time to brave it.

We woke up on Friday morning and gathered up our suits and shoes and movies and workbooks.  A couple of granola bars, waters and movies later (Maria found the headphones for the video player in the car so she gets to watch hers and Mario watches his (not spoiled at all)), we were already at the park.  The kids stood in awe of the gigantic roller coaster 100 feet away, and listened to the screams of the riders.  Mario exclaimed “Mom, you and dad could not ride that because you would be so scared!”  I asked him if he would ride it and to my surprise he said “No way!”  He is normally my daredevil.  Maria said she would though – she is my daredevil lately.

We charged in the gates with our bag of cheese pretzels, raisins, waters, and cheese and crackers.  Jill pointed us to Kiddie Land.  The first ride we saw was the Boo Monster ride.  The line was just slightly out the door and the clock indicated that it would be a 30 minute wait.  Maria and Mario begged to go on it.  I was hopeful that they put the little hands on 30 minutes with the thought that you would probably get in within 15 minutes but if you didn’t, you would not get so irritated.  My hopes were shattered when we moved into the cave and there was a line twirling around 6 lanes.  I did not think that Maria and Mario would do too well in that line but they surprised their mama.  They barely whined at all as we crawled through the lanes and got to the ride.  Mario hung on the bars and danced to the music and Maria stood in her own little world thinking about what 6-year-old girls think (?!).  The ride was pretty lame by my standards, and I think Maria felt the same way.  Mario, on the other hand, loved it because it involved using a plastic gun to try to shoot ghosts and goblins that popped up while on the ride.  Any ride that involves guns and violence will win my boy over. 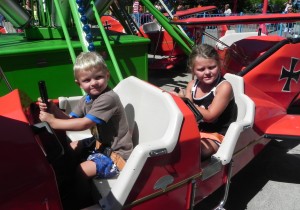 We moved over to a couple of “kiddie” rides (helicopters, cars, etc.) and then we made our way to the log floom.  My favorite when I was a kid.  My girlfriend, Beth and I would stand in line for an hour or longer just to get on this ride and get soaked by the water as we plunged down the hill.  I told stories about Beth and me while we waited.  Luckily, we were there early enough to only have to wait about a half hour before getting on the ride.  Mario had already taken off his shirt and shoes before we got in the boat.  Unfortunately, the workers made him put on his shoes.  This really bothered my little man.  He did not want to get his gym shoes wet.  Maria wore her suit, too and had begged to wear her flip-flops so she was in a good state.  When the boat took off, Mario wanted the front.  By the time we had moved 100 feet, water had splashed in the boat and gotten his shoes wet.  “I don’t like this ride, mom!”  I calmed him down until we got ot the top of the hill and got ready to take the plunge.  maria was so excited.  And then, swoosh!  We flew down the hill and Mario and I got a decent soaking (not as good as my teenage days)!  Maria was in the back so she didn’t get as much (and she is the one that wanted it!).  Mario stepped out of the boat pissed as can be.  “Mom, I never want to go on that again – my shoes are so wet and my hair is messed up!”  Yeah, I kid you not.

In order to make it up to him, I took them to the “Eiffel Tower.”  We rode up on the glass elevator and my stomach sunk with each additional foot we rose.  I cannot hang with heights any more.  When we stepped off, the kids darted straight to the edge to look down.  It took me two minutes to gain my composure and head their way.  Mario yelled “Mom, come here, you can see Africa and North Carolina!”  Maria wondered where Grandma Lolo and Grandma Menkedick lived.  They loved it.  I was happy when they wanted to head down ten minutes later.  Next, we went to the games area.  Why?  I still have that competitive kid in me that wants to win a stuffed animal.  When Beth and I went to the park, we spent hours at the games trying to win animals (how did we have that money?!).  I loved the bowling game (probably because it only cost 25 cents).  You have to push the bowling bowl over one hill and make it stay in the valley and not come back over the hill again.  It is hard as heck but when I was young, I had some knack for it.  I won many a stuffed bear and monkey playing that game.  As an adult, not so  lucky.  Maria and Mario and I tried numerous times and only left frustrated.  We moved to the slingshot game and the plinko but no wins.  Our only hope was the Guess your Weight or Birthdate game.  Maria walked up and asked the girl to guess her weight.  She got on the scale and topped 63 pounds.  The girl had guessed 59 and could only be off by three.  She won!  Mario was next and I knew should guess his weight so we did birth month.  She guessed May and she had to be within 2 months so Mario won!  Maria took two seconds to pick out her bear.  Mario took 20 minutes.  He could not choose between a telescope (that would have cost a $1 at the dollar store) and a whale stuffed animal.   He begged for both of them.  He finally chose the darling whale.  When we walked over to watch another game he told me he wanted the telescope.  We went to exchange it and he begged me again to let him have both.  After ten minutes, he decided to keep the whale but kept mouthing to me “And the telescope.”  He never stops.  As we left, he tried to bargain to come back to KI on Saturday to get the telescope.  He knows how to keep the pressure on.

After the games, we were all starting to break down a bit.  The kids were leaning back in the stroller holding their animals and I was moving a lot slower.  But no rest for the weary!  We decided to trek it over to the waterpark for some water fun!  I asked where is was located and a worker told me where to catch the tram.  I asked if I could walk, and he laughed.  “Sure, but most people take the tram.”  When we got to the tram pick-up, I saw a path to the park.  I decided to walk with the kids.  The waterpark could not have been 1000 feet from the tram pick-up.  It would have taken more time to load up the stroller than to walk.  People need to move more.  ALl sorts of different folks packed the waterpark.  We hit the shallow pool and then moved onto the slides and squirters.  I got rather freaked at that station because I could not keep a good eye on Maria.  Mario was so cold that he clung to me but when Maria went up the stairs and through all of the jungle gym squirty stuff, I lost her.  I watched the slides hoping to see her.  Nothing.  I ran to the other side.  Nothing.  I ran back and climbed the steps. Nothing.  Finally, I looked down and saw her going down the slide.  “Maria!” SHe looked at me and it was love at first sight.  One of life’s greatest feelings – to find your kid when you think they are missing.  I warned her that she had to stay close.  Some of these parents just let their kids go on their own throughout the area but I am so not one of them.  I know I am going to be bad when she gets to the age that she can go off by herself – I get anxious already about the day.  We rode the lazy river next.  Mario and I got in an inner tube for about 3 minutes and then we were ready to walk and end the trip.  Maria, on the other hand, laid back in her inner tube, head propped on the headrest and eyes closed.  She enjoyed every minute of it.

Family pose waiting for a ride (with Mr. Comedian)

After the water park, we headed back to the rides for some bumper cars (Mario loved hitting other kids’ cars but was mad he did not hit enough) and the “mini” roller coaster (cars go around in a circle and speed up around the corner).  We also hit a little bigger roller coaster that actually had a hill to it (albeit small) and Maria sat in the front and held up her arms.  Mario leaned into my chest to hide.  You get the picture of the daredevil in the family, heh?

I finally persuaded them to leave the park 6 1/2 hours later by telling them we would go to McDonald’s play land up the street.  Yeah, I am not kidding.  I was craving a hamburger anyway.  I just needed out of the park, too.  The kids played in the Playland; we saw Grandma Lolo; and I loaded up on Diet Coke and fries to steer us back to Columbus.  On the way home, Maria and Mario held their animals tight as they watched the rest of their movies.  When we got home, Maria begged me to sleep with her.  I said no at first but then the thought of lying horizontal sounded too good.  I tapped her shoulder as she laid in her bed, and she came running into my room.  We laid together talking about KI and school and how much we would miss our house when we moved. 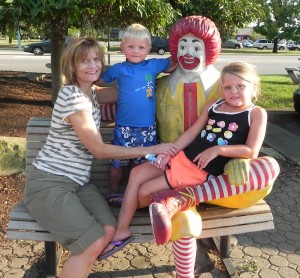