Ten years ago if someone would have told me that ten years from now I will spend your entire day at a roller rink and a 1800’s ship, I would have laughed and told them that they had mistaken me for some other poor woman. 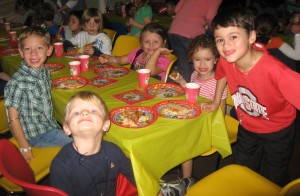 Fun at the roller rink

The roller rink adventure occurred in the afternoon from 1:30 until 4.  Maria’s friend, Zach, turned 7 and invited Maria (and Mario by default) to the roller rink party.  I think it was a few years too early for such a party – most of the kids had to hold onto their parents with the others braving it on their own but falling on their rears every five seconds.  The birthday boy skated well because he frequents the roller rink with his parents.  He had a great time skating around the circle like a pro.  I guess it’s his b-day party so he should get to choose an activity he loves.  I just worried that some kid would leave the rink with a broken ankle!  Maria and Mario at least gave it a try but after a short period of time, decided to call it quits.  You could see how hard Maria was concentrating on her skates trying to stay balanced but she didn’t have enough time to get into any groove.  There were some brief moments when she held her own but then I’d fell her arm shoot out onto mine and I would catch her before her fall.  Mario tried the regular roller skates for a while and then moved onto the plastic ones.  He did much better on those because they are so cheap that the wheels barely spin.  I think their favorite part of the roller skating experience was hearing Big Time Rush’s song as they stood in the middle of the floor.  Both of them perked up.  Maria sang the words to herself and dazed off into space like she always does (I worry about what she is thinking!).  Mario brought his arms up to his face and did the rap star moves he does so well.  It reminded me of my skating rink days in eighth grade when a Wham! song would play and all of the girls would dream about one day skating with their beau out on the rink.

Pizza and punch came just in time.  These roller rinks are madhouses when there are birthday parties.  They must have had four or five parties going on at one time.  Each party gets two tables and the tables are crunched against one another.  Kids are fighting to get a seat and eat their pizza.  No one is talking to each other; they are too worried about eating their pizza and drinking their red punch. Soon after the devouring of the pizza, the kids rush to the games with their complimentary tokens.  These games are such a rip off – pay 50 cents to win a tootsie roll or cinnamon candy.  I guess they had the same games when I was a kid at Showbiz Pizza but as a parent it now gets on my nerves.  They played at least five rounds of games and scored 20+ tickets but when we went to cash them out, they got to choose from a plastic ring, a tootsie roll or a plastic finger.  You had to have 700 tickets to get a small beanie baby.  Alas, life at the roller rink.

Leaping stone blocks at the riverfront

We left the rink for the next adventure – Alana’s and Giovanni’s visit.  Jon’s brother and his wife had tickets to the OSU/Wisconsin game and Jon’s mom got sick so they asked me to babysit Saturday afternoon through Sunday morning.  In a strange, warped way, I had been looking forward to it.  I love seeing the kids together, and Alana and Giovanni are sweet kids.  In a normal, sane way, I knew it would be a long night for me (Jon got to head to the game with his long-time friend in from Phoenix).  My strange, warped self triumphed.  We had a really good time together.  We dropped Carrie (Alan’s and Gio’s mom) off at the game and then headed downtown to the riverfront to see the statutes.  Alana cracked me up as she stared at the “skyscrapers” in amazement.  “This looks like New York City, Mary!” 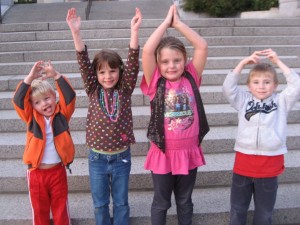 We played on the statues and then went down to the riverfront to see the Santa Maria ship and play in the grass.  A crew worked on the Santa Maria to get it ready for the haunted ship adventure, which started at 7 pm. The kids begged to go on the ship but it was only 5:30.  Again, my warped self thought “you can let them play and run around until 7 pm” and my normal self said “get home and let them play on their own in the warm house.”  My warped self prevailed again.  We played around the ship and walked up the street to see City Hall (and having a burst of OSU pride with an O-H-I-O stance in front of the Hall) until 6:30 when we jumped in the car to head to Wendy’s.  I was thinking a quick in and out but this Wendy’s was probably the slowest I had ever been to taking 21 minutes to get our food to us.  We were all getting irritated but as Alana and Maria said “at least the food was delicious.”  The kids also scored a cool toy – binoculars that had a slit to insert a paper with an animal on it so you could see it up close through the binoculars.  The kids loved them, and I think it is the best toy we have ever gotten from a fast-food joint.  Educational yet fun.  We didn’t get back to the ship until about 7:30 and the line was at least 150 people deep.  Alana was devastated.  So, what does any good Aunt do?  I bribed the ticket people to get me with the next group.  Actually I simply stated that we had been down at the ship earlier and went to get food nut got stuck in line and now the kids were so cold because they weren’t dressed properly and the only way we could stay is if we could get in ASAP.  So, in a nutshell, a very sad pity party story.  But it worked and the generous crew got us on right away.

I was worried about the tour a bit since I did not want Gio and Alana to have nightmares for two weeks – their parents would kill me.  But it was my daughter that was the most freaked out complaining that she would definitely have nightmares after going through that tour.  Mario was oblivious to it all (at one point confronting a scary ghost by taunting “Bring it; I am not scared of you!”).  People shouted at us under blankets, sat up out of coffins, and wore scary masks but Mario barely flinched.  Alana and Gio seemed a little scared but did not want to leave the ship.  Maria was the only one that was ready to bolt.  My sweet girl.

After the haunted ship, we bought a bag of popcorn to allay our fears and headed home.  The kids played a while downstairs while I hung pictures throughout the house (Maria saw me and exclaimed “Mom, now you feel like its more of your home!”  A day ago she overheard me telling Jon that the house needs pictures in order to make it feel like our home).

The kids' sleeping quarters in the attic

We got our pjs on at 10 pm and headed up to the attic to prepare their sleeping quarters.  Actually, they headed up to the attic – they would not allow me to participate.  I love how independent they are anymore.  They did a good job spreading the blankets and pillows.  They brought up a ton of animals and books to read.  The only fight occurred over flashlights because there were only three working ones.  After some play time and read time (and wrestling time between Mario and Gio), they asked me to turn off the light.  Amazing.  Everyone was asleep within ten minutes except my boy Mario.  He begged to come downstairs with me to get some food.  I fed him some cheese and crackers and a yogurt drink and he laid down on my lap while I watched the end of the Ohio State game and passed out within five minutes.