Mario returned home from Grandma and Grandpa Ionno’s house this evening.  He wasn’t in the door for ten minutes before he asked them to go back to their house.  I have no doubt that he would be just fine visiting us every other weekend and living day in and day out with Patty and Joe.

He hid from me when I got home from work and only when I faked crying for two minutes did he come out from his hiding place and give me a big ol’ smooch and hug.  His arms wrapped around me felt like a piece of heaven.  Could I just bottle up that feeling and open it up on those days I feel like jumping out my window?!

But within 30 seconds of giving me a hug, he begged me to wrestle him.  That is all he wants to do anymore.  Wrestle or box.  He could do it all day long.  I can last about 15 minutes.  Maria joined in after 15 minutes and within 5 minutes, Mario hit Maria in the mouth (truly an accident, I think) and she slapped him the face.  The crying and screaming ensued.  I wrapped up the WWF and moved us up to the bath where I hoped the warm bath water would calm them down. It did nothing but cause water to be splashed everywhere. 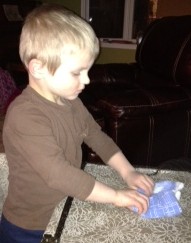 After our bath, we headed downstairs for the most random combination of dinner food possible.  Pancakes, hash browns, hot dogs, hot pockets, cottage cheese and cheesy veggies.  Just the sound of the combination makes me gag but it wasn’t bad while we were eating it.  I grabbed two loads of laundry that needed folding and brought it into the family room to fold while we watched Blues Clues (haven’t watched that show in two years).  I didn’t have to say a word to Mario and he dove right in to help me fold.  Maria not so much.  She draws the line at certain chores and laundry is one of them.  She gets away with it for now but another few months and she is in for a rude awakening.

Mario is the most meticulous clothes folder I have met.  Even a more amazing feat when you consider that he is four years old.  He folds clothes over three or four times and makes sure that there are no edges sticking out before he hands them over to me to put in the pile.  It is hilarious.  He is going to be one of those people whose closets are in such complete and total order that you wonder how they function in the real world.  Then again, I am probably completely off base because I see his closet and floor and they are both a disaster area full of unkept clothes and shoes. 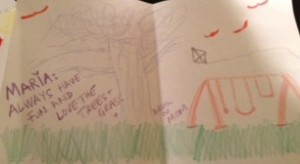 After folding, we drew pictures.  Maria drew me a picture of roses and I

drew her a picture of a tree and birds and a swingset.  I exhibit the poorest, saddest, drawing ever for a forty-year old.  The drawing look identical to drawings I made at age 8.  At least my writing is a tad better.  Mario drew a picture of a sunflower for Grandma and Grandpa to thank them for having him over this week.  It was precious.  We missed the little bugger although it was nice for Jon and I to relax together from 9 pm onward.  Maria always fell asleep at a normal hour.  Here we are tonight as I write this with Mario dancing around the downstairs waving his arms and singing “I’m sexy and I know it!”  It is 10:45 pm.