Mario lived his dream of being a superstar last night. He danced all by himself on the dance floor with the entire wedding party and guests watching and cheering his every move. The DJ asked me Mario’s name and I told him. He went back to his stand and yelled in the microphone “Let’s hear it for Mario!” Mario turned to me in disbelief. He was charged!

The DJ challenged the guests to a dance-off with Mario and this gorgeous southern belle took him on. She kicked and punched the air like Mario, did the robot like him, and jiggled her hips. But he pulled out a cartwheel on her and she gave up and bowed down to him.

“Did I win, mom?” he asked me later in the evening. The kid never fails to find competition.

Maria, meanwhile was persevering through pain. She wore “high heels” with her dress and they were killing her feet (like all heels do!). I kept telling her to take them off but she’d reply “mom, it’s a wedding and I’m in a dress; I can’t take off my heels.” She certainly doesn’t take after her mom who wears gym shoes with her dress! It scares me that she was willing to deal with the pain of heels in order to remain in high fashion – god help us. 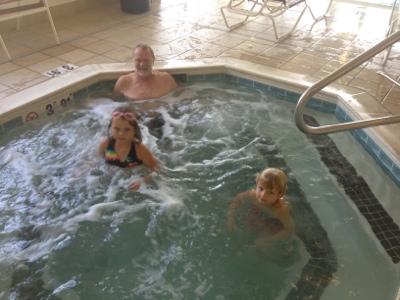 We also got in some quality hotel pool and hot tub time – Maria stood on Peepaw’s shoulders in the pool and Mario acted like a fighting superhero in the hot tub jumping from side to side with his fist outstretched. We also got our money’s worth at the breakfast buffet filling up on waffles, eggs, sausage and fruit loops. Massive carbs – just what I needed for a four hour drive home.

We stopped over at Aunt Kathy’s condo before we headed home – Maria got to see the married couple before they took off to Jamaica (she’s still blushing over Miles’ comment that he’d save her a dance at the reception ( when he asked her later she was too embarrassed)). Kathy had Krispy Kreme donuts and chick-a-filet sandwiches – who can resist that action?! I felt like I was in a coma after taking those down and would have paid top dollar for a chauffeured ride home.

But thank goodness for five-hour energy drinks – I was back to normal in no time flying up I-71 to Columbus and listening to M&M interchange between begging to go back to the hotel and ask ing how much longer to home every ten minutes. I knew I should have gotten some Advil with my five-hour energy drink.