If I have passed one worthy, admirable, cherished tradition to my children, this is it.

It’s taken 7 and four and a half years for Maria and Mario, respectively to start this noble hobby but our trip to Michigan ignited the flame. We found a putt-putt in Traverse City that sold old dishes and knicks-knacks and SUPERBALLS! Just the way I used to buy them, too – right out of a gum ball machine. The only difference was that they were 25 cents versus 10 cents when I was little.

And M&M even engaged in the same action that I did after I got a superball – analyze it and name it. I was always very creative naming my dark blue balls “Midnight” and my orange balls “Sunny.” Mario has that same creativity. He got one with square colors painted on it and called it “Squarey” and a multi-colored ball that he named “Colorey.” Maria provided a little more artistic touch naming one “River” and another “Earth.”

They brought the balls up to our room and gave them baths; placed them in “beds”; and put them to sleep. It was very sweet. Of course, an hour later they had thrown the balls around the room and didn’t know where they were located. I am going to have to teach them how to be better Superball Caregivers, for sure. I do have a legacy to uphold. 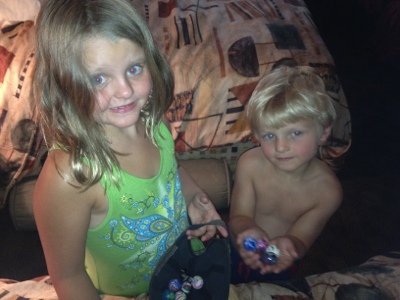