It’s just me and Mario tonight since Maria is at her grandma’s house and Jon is partying with his buddies in Baltimore (he is actually working but heading out to awesome dinners in the evening so I discount his time away as play!).

Mario and I took a bike ride to the library to pick up two Wild Kratts DVDs on hold for us from another library. Mario’s been asking for these for a month and he was so charged to hear they were finally waiting for us. He biked like a mad man to the library in order to pick up the DVDs (however, he did take the time to climb off his bike at certain uneven driveways and cross walks to ensure that he did not tumble over on his bike – the daredevil has his limits, I guess).

After picking up the movies, we headed up north to Dick’s Sporting Goods to purchase his mouthpiece and cleats for flag football. He chose some rockin’ white and black Under Armour cleats and a red and white mouthpiece. He keeps asking when Wednesday night will be here. He’s just a tad bit excited.

On the way home, Ri called to say hi. A few minutes before she called, Mario had lamented to me how much he missed Ria. When she called and I told him it was Ria on the phone, he held up his right hand and said “Don’t say her name, it makes me miss her more and I can’t stand it.” That will make Ri’s day.

When we arrived home, Mario asked me if I knew how many girls he liked. I told him I didn’t know and probably didn’t want to know. He told me he had 20 girls he had a crush on and his number one crush was Jillian, a girl at his school. He continued to show me his love for her…

“I like her so much that one day when I had to fart, I scooted over to the couch and held a pillow to my butt so she wouldn’t hear it.”

How incredibly sweet, heh? If only more men were so considerate?! 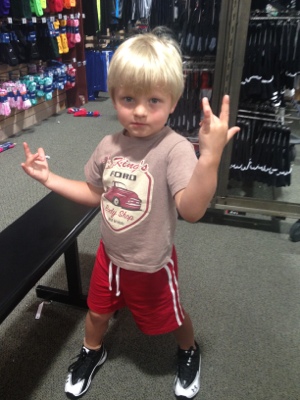