We packed the Volvo full of blankets and pillows and sleeping bags and Red Bulls and chips and chocolate.

All to head two hours east to my folks’ farm.

We had to take the Volvo due to weird sounds coming from Jon’s Yukon. You would have thought the world ended according to Ri who complained about how squeezed she felt in the Volvo. We would expect nothing less from her, however, since she always talks about her first car being a mammoth SUV. My girl likes her space just like her dad.

We arrived at the farm and within five minutes of exiting the car, Mario begged to play badminton. The boy loves this game and could literally spend all afternoon playing it. He looks like a pro out there with his shirt off, hair tussled and tanned body. Maria went straight in the house to help cook and position herself for any sampling of extra food.

We celebrated dad’s and Jorge’s birthdays with cherry pie and cupcakes. Maria snagged a gift for Peepaw from her treasure chest at school. It was a huge pair of clay lips. She wrapped them in a Victoria’s Secret box. Dad was clearly surprised at the box and the lips! Maria explained that the lips were a paper weight to hold down his poems after he wrote them. What a doll.

Dad retired in June after working 40+ years to support his family. He plans on writing in his spare time which Maria overheard during one of our conversations. The girl has my desire to think through presents to the nth degree and make sure they have a purpose. I love it!

We sang the traditional happy birthday song to the boys and watched them make their wishes.

After the celebration, we worked off dessert with a family badminton game. Mario made sure it stayed competitive and Maria made sure we kept it light-hearted! After an hour and a half of competition, Mario, Jon and Peepaw stacked wood to make a fire. Ri and I got the materials to make s’mores and before we knew it we were sitting in front of a blazing fire eating marshmallows and s’mores and telling stories about when Sarah was little. Maria loves listening to stories about the past (especially when she’s able to eat marshmallows!). Mario played with the fire the entire time intrigued by the heat and flames.

Maria enjoyed seeing her horses and got to perform obstacles while riding Taz. She amazes me on the horse. She is so calm and in control, and she knows so much about them already. I love watching her brush them and kiss their noses.

We headed to Mario’s and Vicki’s house on Sunday after gobbling up Sarah’s sweet potato hash for breakfast. We had not been to their house in months and Vicki cooked so many magnificent things, as always! Meatballs, spaghetti, tomato salad, homemade bread, steak, and zucchini bread for dessert! Jon and I could not move for a half hour. When I did finally move, I bounced on the trampoline with Maria. God help me. I can’t believe all that food stayed down!

Ri and I had a blast on the trampoline – we laughed so hard at each other bouncing everywhere. At one point she crawled over to me, laid on me, gave me a huge smooch and whispered “I love seeing you laugh mommy!” My baby girl. Mario and Ri had a good time, too, while Jon and I sat with Mario and Vicki on the porch and chatted. The weather was perfect. 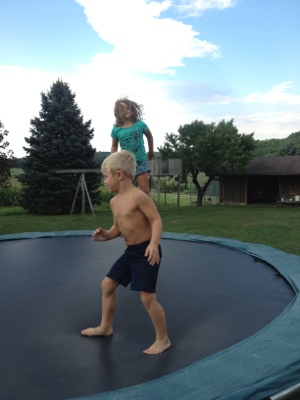 We arrived back at our house in time for Ri and I to take a quick bike ride to Giant Eagle to get food for school and work. We even got sample sheet cake from the bakery ( two pieces each!). Life is good.