Yesterday Jon and I came home from work to two wild, spazo kids. Maria and Mario were both hyped up – Maria from her first Brownies meeting and Mario because David picked him up early during nap. Maria screamed every word she said in pure excitement; Mario zipped from one room to the next like a pinball. Ahh, nothing like relaxing after a long day at work. But they do keep us going….

I made Maria’s new favorite dish, hamburger helper (at least I used 98% lean meat)! While eating, we discussed Maria’s laws as a new Brownie. As part of her homework, she had to write down which law applied best to her family. She chose “respecting each other’s words” over courage and helpfulness and kindness, among other laws. She picked it, she said, because she thinks it’s important for us to always listen to one another. I loved that.

Of course, Mario chimed in at the tail end of her explanation to stand up on his chair and make some funny face. He then told us how eight girls had crushes on him. One in particular, Viv, told him she thought he was cute because of his tan. There’s that tan reference again! In order to get him off the girl fixation, I asked him what he loves about his family since that was Maria’s next project.

Maria was a lot less generous. She only had to write one thing she loved so she wrote that she loved my cooking (because of the hamburger helper that night!) and Jon’s ability to fix things.

Speaking of fixing things, later that evening Jon and I found a worksheet she prepared where she had to answer a question asking “when a person is sad, I BLANK.” She wrote in “I try to fix it.” I about fell over. For years, I have talked about the difference between Jon and I when it comes to approaching someone’s problems. I react by consoling the person and listening to them. Jon reacts completely opposite. He immediately gets the wheels turning in his head to try to fix the person’s problem. When I saw Maria’s answer, it affirmed yet again another personality trait she has inherited from Jon. Daddy’s girl.

After dinner, Maria wrote and decorated her Brownie star with what we discussed that evening and Mario wrote letters I randomly quizzed him on (he’s getting much better – yea!).

They both sat still for an entire half hour (must have been the carb overload in the hamburger helper!). 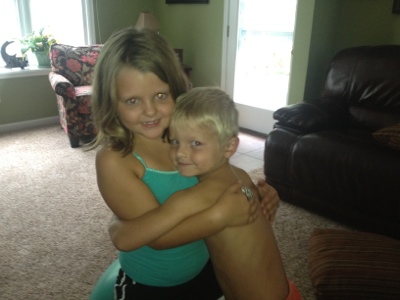