“When I grow up I want to be a little boy.” – Joseph Heller

Gio descended on our house tonight and Mario and him have been moving and shaking ever since. They played guns in Mario’s room, fought dragons, and played Wii. All within 15 minutes. I calmed them down for a small amount of time with a science project in the kitchen. We made a volcano with baking soda and vinegar and food coloring. The boys thought it was cool for five seconds and then they dug their fingers into the hole of the volcano and scraped out the baking soda and food coloring in order to smear it on themselves. Really?!

Next, I had them color paper plates in order to make macarenas. They colored for about three minutes and were ready for the next project, which ended up being a concert for me. They crooned and played their instruments while I cheered them on in the basement. They actually performed for me for a good chunk of time. Impressive. Then they moved on to wrestling and pillow fighting, which was still going on an hour later. I guess they can handle long spurts of violent activity.

Dealing with boys is a 180 degree difference from dealing with girls. Maria and Alana would have been up in Ri’s room for hours before I saw them and then they’d have spent time coloring or playing a card game or watching a movie (they are loving life together at grandma’s and grandpa’s house this weekend).

At 9 pm, I put on Spider-Man for the boys and they still jumped all over each other.
I want that energy.
Now.
Can I usurp it from them?
They just keep going and going and going. I realized that the only thing that settles them down is feeding them a bunch of junk so they get lazy from full stomachs. We brought out the Pringles and sugar after a bit. They looked like little old men eating in their beanbags. 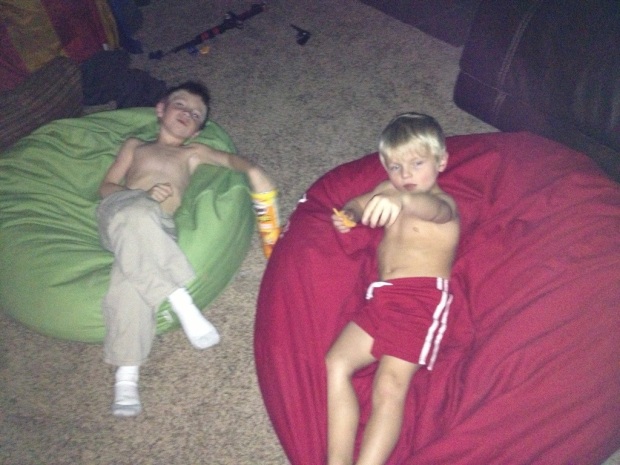 The Pringles did the trick.

I have a bit of fear in my blood about a full day with these young men tomorrow. My desire to get out and stay active will undoubtedly be met but will it come at the cost of a headache from popping around all over the place? I’m tempted to rent a bouncey house and let them jump in it all day while I rake the leaves and listen to NPR. But then I’d miss out on the concerts and the science fairs and I just can’t bear that thought even with as exhausted as they make me.