Behave as if tomorrow is your last day.

So that has been my motto the last few days. I had to figure out something that would make me pay attention to all of the wonders before me: my hubby and kids, my family, my home, warm socks, Lucky Charms cereal. I had such a maddening couple of weeks at work that I lost balance and found myself on the low end of the see-saw that was stuck in the mud on the ground. I’d come home to kids who yelled “Mom!” and I would put on a smile for them but as they ran away to get a game to play or show me a cool toy, my smile vanished and I stood in the room all funked out. It didn’t help that I got my hair cut in those same maddening work weeks. I went to a new gal and told her I wanted bangs.

“Just make me blond and give me bangs – what the hell,” I told her one night after work.

Usually stylists are hesitant to make that move, especially if you are a new client. But this gal had bright red hair, tattoos everywhere, and quite a few piercings so if I told her to go for it, she was going for it – no questions asked. She completed her work and I wanted to sob. Yellow canary hair and straight, straw-like bangs. I couldn’t have looked less attractive. We took another hour and a half to tone down the yellow but I still walked away feeling like a mix between a monster and an 80’s punk rocker. It didn’t help that when I walked in the house, Jon’s mouth dropped and all he could say was “Oh My God.” Actually, he said one more word after that. “Thor.” Yeah, he called me “Thor.” I couldn’t really remember what Thor looked like but I knew he was making fun of me. A few minutes, he called me into his office with the kids. He had a picture of “Thor” on his computer screen, and pointed to it. The kids felt my pain and responded “that does not look like mom, dad! Only his hair looks like mom!” I wanted to crawl into bed and not return to society.

But alas, within a couple of hours, I was laughing with them about my hair and putting it all into perspective. It’s just a haircut, heh? Really, so I look like a male warrior, it could be worse. Not sure how, but it could be.

And so I decided this weekend that I would turn myself around – change my negative thinking and get on with it. I am now back on balance somewhat. Riding close to the middle of the see-saw. I even managed to handle a trip out to Dover on Saturday with Jon, the kids and Patty and Joe. I was a little frantic about the trip on Friday night because I wanted that day to prepare for Jon and I’s Cancun trip. I had also found out from Vicki a few nights earlier that the baby shower we were heading to (hence the trip to Dover) was going to have 100 people and be three hours long. Baby showers are those necessary evils that you must attend because a baby is going to be born! When you are the mother-to-be, it is the greatest ever. When you are a guest, it can be taxing at times, especially when there are 60+ gifts to open. But the visit went much better than anticipated. I got to spend time with Patty, and the kids got to torture her in the backseat by making her watch Homer Simpson iPad games and color rulers. We got to eat cupcakes and talk to Vicki and look at all the sute baby clothes that Stacy got. Maria got to sit next to Bianca and listen to her and her friend talk about random things like make-up, hair and boys. She was mesmerized. There were a few other little girls 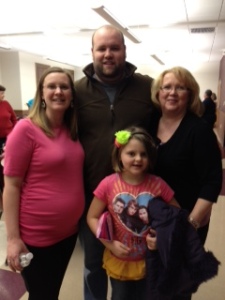 there ranging from ages 3 to 10. Maria was ok playing with the three-year old because she just held her around the lobby but she was completely awkward around the 10 year old girls. I had to stand out in the hall with her for 20 minutes making conversation with the other girls (who were just sweet as can be). When I finally told Ri I had to go back ot the party, she stood out there a few more minutes but then came back inside. She eventually went back out in the hall after some prodding and had a good time with the girls but she is not the chatty-kathys like Patty and me. She has got her dad in her in that area. She has always been one to choose to hang with the adults – even when she was three years old. It is that old soul in her.

We went back to Big Mario’s and Vicki’s house for some wine and some trampoline jumping (yeah, be careful mixing the two). After an hour or so talking with them, we drove home in near white-out conditions at times. Luckily, Jon drove. Patty and I kept the kids busy (she read an entire Aesop’s Fables book to Mario and I made up stories with Ri) until we got home. Then we ate more cookies and cupcakes and went to sleep at 9:30.

We woke up on a frigid Sunday morning and made chocolate chip-peanut-butter pancakes and eggs. It was heaven. I read them a few facts from the newspaper as we ate (the Pope is resigning; the economy is looking better; the Underground Railroad Freedom Center is in Cincy and we need to go soon). At one point Mario looked up at me with chocloate chips caked around his mouth and all over his hands. I almost let out an exasperated sigh but some other force came over me and I laughed. I laughed hysterically, which caused the kids to laugh hysterically. We couldn’t stop. It was marvelous. And awakening.

The moment took me to the high end of the see-saw.