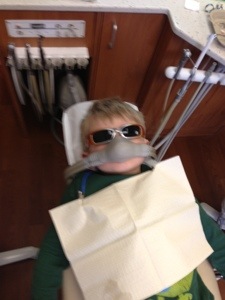 And so we returned. But this time to a pediatric dentist in Dublin named Dr. Harring who was sent from the heavens, I’m quite sure. After a most hellacious experience a couple of months ago, this dental trip was a piece of cake. Jon had taken him a few weeks ago to an initial consultation with Dr. Harring and really liked him. It was at this time that he found 6 cavities in Mario’s mouth as well as a tooth that needed extracted because it was infected. Lovely. Just stick that “Mom of the Year” pin on my chest. I will never forget that sinking feeling I had when Jon texted me with the news. I was sick the rest of the day.

But then perspective opens up and you realize all you can do is move forward. And so we did. We promised Mario a Skylander and a a package of $4.99 coins for Heroup.com if he was a strong boy and stayed still. I ate a gallon of peanut butter chip ice cream the night before his appointment.

Spider-Man and I showed up at 9:15. The dental assistants loved his outfit. The waiting area has video games and toys to keep the kids busy. Nice touch. 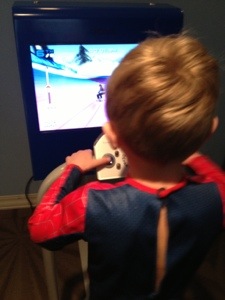 The dentist arrived shortly after we walked back and hooked the laughing gas onto Mario, turned on Scooby and all went smoothly. At one point, Mario started waving his hands in the air and talking nonsense about the Scooby show. The doctor told him the gas should be relaxing him but Mario said “no way, I am hyper!” I asked the dentist to describe how Mario feels with the gas and he said it’s like us drinking two glasses of wine. Now the arm-waving makes sense.

I cringed when the dentist pulled Mario’s tooth but thanks to the gas and a boatload of novocaine, Mario felt nothing. He high-fived the dentist after it was over and bragged about going to get a Skylander. I told him that I wasn’t sure he needed a Skylander since the procedure was so simple. He told me I promised him. A deal is a deal – I will know next time (seeing we have at least two more visits to fix up those teeth – I am the toothbrush nazi every morning and night after this insanity).

We drove straight home because Mario decided he wanted to buy 2 $4.99 gold coin packages rather than a Skylander. When I went to try and buy them my credit card would not process. So I got irritated and restarted the computer and tried again. The second time it went through immediately. Then a screen popped up and told us our first try went through so that pipsqueak got $20 worth of gold. He loved that.

I called Patty to update her on the appointment and she had news for me when I told her how much I hate taking Mario to the dentist.

“Mario told me the other day that he loved going to the dentist because he got toys afterwards and got to stay out of school.”

I think I’ve been taken by that boy.