A list of all the events from the weekend of March 8:

Ri headed to Kids Night Out at Stevenson. She stayed in Ms. Palmer’s room with the third graders to help watch Ms. Palmer’s little boy, Colin. She would give up friend time to watch a little kid anytime. She also got a healthy dose of Spongebob while they waited for Mrs. Palmer to get organized. 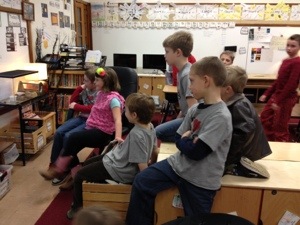 When I picked her up from KNO, I ran down the hall with her and out the door trying to pinch her behind. We jumped onto a stone structure and laughed as we tried to get our breath. She looked at me and said “you are the funnest mom ever!” Words tucked away in my heart. 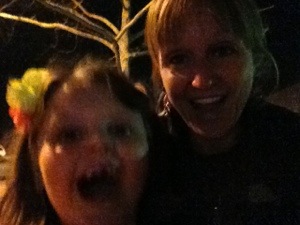 2. While Ri was at KNO, I took Mario to Target to buy new shirts and a Skylander (he got to buy that with his own money). We got our icees and headed straight to the Skylander aisle. And… we stood there for what seemed like two hours deciding which Skylander to buy. Another kid came over while we were standing there and he and Mario acted like old friends as they chatted about their favorite Skylanders. Hilarious. We ended up with Stealth Elf who Mario reported was liked by everyone – even our babysitter David. A cute little gal, I must admit. Then we headed to the clothing aisle. Doggone Spring clothes were already out so we could only find a few long-sleeved shirts. He found some boxers that “looked just like dad’s” so we got those, too. We got a good deal on a Dr. Seuss book – $5 – and Mario “read” it on the way home. He is hilarious with reading. He simply looks at the pictures and makes up his own story. He’s pretty creative, and usually some up with a more interesting story than the one in the book.

“I have my new running shirt, mom! I want to test it out!”

Ri biked (her worst nightmare is running!) and Mario and I ran. I explained to him about keeping a steady pace which he adhered to for two seconds and then sprinted again. After about two blocks he turned around and said “why aren’t I sweaty yet, like you always are?!” He wants to come home sweaty just like his mama (another one if Ri’s nightmares!). We played at the park a while and then went home to toss the football. 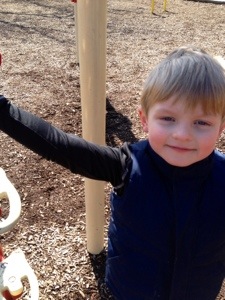 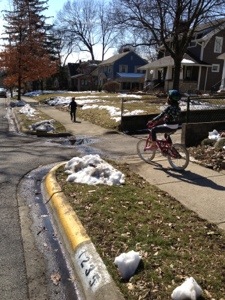 After running around, the kids were ready to chill in the car for a trip to Cincy for Cy’s 18th birthday party. Mario made dad and I engage in a singing contest (dad won with his famous song “Spicy Meatballs”) and Ri drew a picture for Cy’s birthday. When we arrived, the kids went straight to Robert and Cy and their girlfriends to play. Robert tossed the football with Mario and Cy messed around with Ri. There was a two-year old boy at the party so Ri was in heaven chasing him around and holding him. She is gonna be a heck of a babysitter.

Jane made killer lasagna and garlic bread: the Italian Ionno family was quite pleased. Liz and I ate with the kids downstairs cracking up at Ri going to town on her lasagna and Mario trying to play pool. Jane has hosted 72 birthday parties over the years for her kiddies – what a machine! We sang happy birthday to Cy, gobbled up chocolate cake and ran around the house wild until it was time to head home. 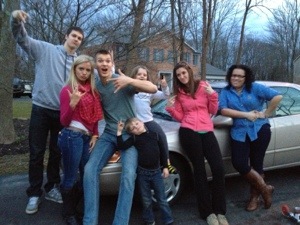 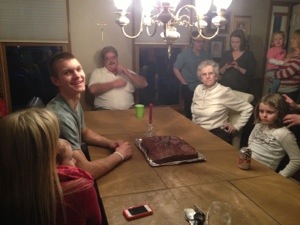 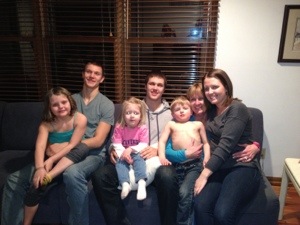 Ri rode her bike and I ran up to Stauf’s. We took a long way up and down side streets to make it a three mile ride/run and Ri cranked it out on her old, run-down bike. She prides herself on being able to ride this bike (she always asks “do you think [insert friend’s name] could ride this bike like I do?). The chain is rather rusted and the pedals are tough to push but she has her parents’ strong leg muscles!

We had a wonderful Stauf’s trip – we sat outside in the 60 degree weather eating a chocolate chip scone and talking about school. I love mornings like that. We brought home a donut for home-body Mario and got ready for the Ionno clan to arrive.

We hadn’t seen Alana and Gio for a while so the kids were excited to have them over.  As soon as they arrived, Ri and Alana were upstairs playing barbies and Gio and Mario were on my bed with my iPad and Grandma Ionno’s iPad. When we made them come downstairs to play, they picked up their nerf guns and acted like they were zombie killers.

I took the girls to the woods to try to find baby bunnies. No luck on that front but we did find a good tree to climb. It was only 65 degrees but Ri was “so hot.” She had to create a “belly shirt” to cool down and slip off her shoes. God help her when Summer hits. 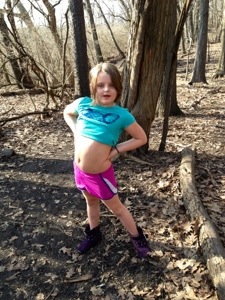 The boys were next. I took them to the woods by the train tracks (I didn’t let them go near the tracks, Aunt Kathy!). They were hilarious talking about Skylanders and zombie killing. Mario kept asking Gio if Gio had a running shirt like he did. When Gio said no, Mario scolded him that he needed to get in shape.

When we returned, I had to play zombie. The boys destroyed me with their nerf guns (they did an excellent job aiming from the waist down). Then Grandma Ionno got in the mix and wrestled Mario. For 70+ years, that woman can hold her own. I can’t get over how much energy she has. She was on the carpet rolling all around with Mario. Good way to stay fit ad work off some of the calories consumed from Jon’s killer homemade spaghetti and meatballs meal.

We ended the weekend on our backs looking up at the sky and debating what the tree in our yard most resembled (I thought the tree stump from Skylanders and Ri thought a mom asking her kids why they broke something – you can see who is more creative).

And here’s to the start of a new week.