Maria was more excited about Easter this year than Christmas. For the last three days before Easter she kept wondering what the Bunny might bring her. I never thought she cared much about the baskets that I create for them each year but I was wrong. As we sat at the table writing letters to the Easter Bunny, she said “I want to say something to her (I love that she treats the Easter Bunny as a girl – my progressive-minded girl) but I don’t want to sound greedy.”

“What are you asking her?”

“I’m asking her to please bring a basket for me and Mario again this year.”

“We’ll, I don’t think that is unreasonable to ask. Just ask it politely.”

So she wrote “P.S. Would you consider bringing a basket to me and Mario?”

I love that girl. She really is a thoughtful little soul. When Mario acted up later in the evening, I told him the Bunny was watching. He could have cared less. So I got more firm with him. Ri started sniffling. I asked what was the matter and she muffled her words “I don’t want my brother to not get a basket.” She watches over that boy.

She left out a cup of milk and cheese for the Bunny. She couldn’t find carrots. Then she went promptly up to her room so the Bunny would come. Mario stayed downstairs. I kept swearing that one day the Bunny would not come because he didn’t go to bed on time. All I can say is he knows he’s got a sucker for a mom and I would never let that happen.

And sure enough, even though he didn’t go upstairs until 10 with Jon, the Easter Bunny somehow managed to fix up two awesome baskets with bug catchers, a Katy Perry CD, Skylanders, clothes, sunglasses, and chocolate bunnies, of course.

The Bunny gave me written instructions to hide the eggs since he couldn’t hide them outside with the rain. The kids tore through the downstairs and the hunt ended in two minutes. They wanted those baskets. 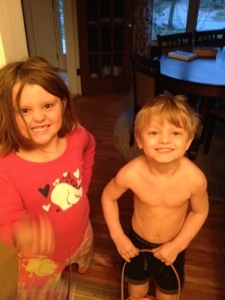 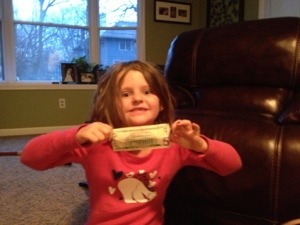 I had to give $5 in an egg to each of them because we missed the Heile Easter egg hunt where there is always the possibility of finding the $5 egg (Grace was the sole participant this year so she got lucky). They were high on candy within 10 minutes (how fast can Mario down peanut butter cups? Three in a minute).

I still don’t know what to think about Ri and her belief in the Easter Bunny. With as old as she acts, I can’t believe she still believes. But then she gets so excited about Easter and writes a letter to her and leaves out food that I think she must believe. But then again, on Easter morning when Mario pulled out a Skylander and I said stupidly “I thought you’d like that one” she quickly interjected”you mean the Easter Bunny, don’t you, mom?” with a coy smile on her face. She keeps me guessing. Mario doesn’t give it much thought as long as there are gifts and money in his basket.

After finding eggs, we headed to Marion for Easter brunch. Nothing like filling yourself up with bacon, ham, creamy macaroni and hash browns before diving into brownies and chocolate peeps. Why aren’t elastic sweatpants allowed at brunch?

Carrie and Gio had to stay home because Gio was sick but we got Alana for the day. Mario enjoys playing with her as much as Gio. Grandma Ionno had eggs ready to be hunted and the kids got treated to more candy and another $5 egg. I’ve never made $10 bucks that easy. 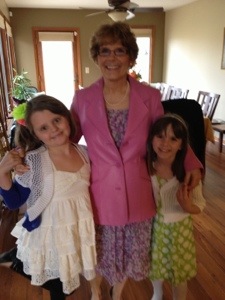 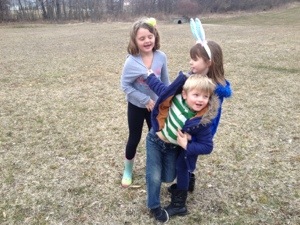 The kids visited the mama and papa geese near Patty’s bridge. The papa squawked at us to stay away from his woman and babies and Mario had to tell us the story of him and Grandma getting chased by the papa two weeks ago. Then the kids rapped on the rocks (much to Uncle Patrick’s dismay – I told him we’d sing hard rock next time).

Mario crashed on the ride home but woke up when we got close to home begging to see Quinn. I told him they weren’t home from their aunt’s house yet and he got so mad. “You promised we could see them, mom!” He is all about keeping promises lately. I explained to him that I said we could see them if they were home. He surprisingly understood and sat quiet. I need to be very careful with my promises from now on because as long as I don’t promise something I know may not happen, he seems ok.

He ended up having a good night with his family. We took a scooter walk and played football. And ate a ton more chocolate Easter bunnies.