Mario made it through his shots yesterday…barely. You would have thought he was undergoing major surgery. Jon and I debated about whether to tell him the night before: Jon was adamant against telling him and I was for it. Of course, I did it and Mario had a complete meltdown. He threw himself in my arms and pleaded for us not to take him. Patty got to witness the insanity since she spent the night with us. I can’t believe how anxious and stressed he gets over shots. For being Mr. Tough in every other area, he sure takes a hit in this area.

I rubbed his back and scratched his arm (he loves when I scratch from the top of his arm all the way to his fingertips) and he eventually went to sleep.

The next morning he woke to the fear of heading to the doctor. He again pleaded to not go for another week. He cried to Patty hoping she’d intervene (which she would have if he didn’t absolutely need his shots). We let him play on the iPad until we had to leave.

“I want everyone to come with me” he begged as we got ready. So Jon, Patty, Maria and I all went down to the doc’s office. He went back and forth between Patty and me while waiting to head back – looking pathetic as ever. 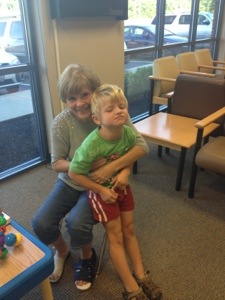 Meanwhile, Maria sprawled out on the couch and gave Mario orders to get her water to try to take his mind off of the shots. When he brought Patty and I water and none for her, she exclaimed “What?! None for your big sis?!” 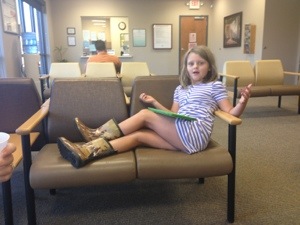 We walked back to the room and as soon as we stepped in, Mario cried and begged to leave. Maria again tried to calm him down by pointing at the used needles and saying “Look Mario, the needles aren’t that big!” Way to go Ri. He cried harder.

Jon promised him $5 if he made it through being a brave boy.

The nurses and Jon and I caught eyes and knew it was time and boom – shots in both arms and we were done! They put band-aids on and it was over… but not for Mario. He wailed on the floor and on the table about how much his arms hurt. Then, after the drama and as Jon was about to leave, he sniffles out “where is my money?”

We knew we were back to the old Mario.