After a week of tugging and pulling, Mario lost his first tooth last night while eating a chicken nugget in the back seat of Jon’s truck.

“I felt something hard in my chicken nugget and it was my tooth!”

He had made it bleed earlier in the day with me and I had told him to stop pulling at it and let it come out naturally. So much for listening to mom. It was welcome excitement after spending most of the day at Children’s Hospital getting his left eye examined due to a cut that his best friend Quinn gave him while dancing.

He has high expectations for the Tooth Fairy. He woke up this morning and found five single dollar bills under his pillow. He counted them out one by one and when he got to the last one, he sighed and said in an exasperated tone:

“I got five dollars.”

“Five dollars! I only got 25 cents when I was a kid.” (I have to add my “I walked ten miles uphill and barefoot” stories in as much as possible).

He looked at me with an understanding expression but then quickly added “Dad still owes me $5 for allowance so at least I will have $10.”

I’m worried he is going to start yanking at all of his teeth in order to get up to $25. 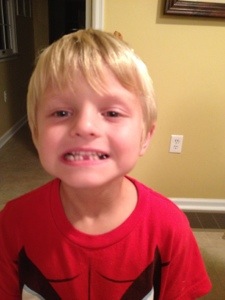