We had to take advantage of the warm October weather yesterday. We packed Rocco’s “bag” consisting of water, bowl, treats, and a chew toy (I finally don’t need a diaper bag and I’m relegated to this). We packed string cheese and crackers and granola bars for us humans. And we headed to Park of the Roses.
I took Ri and Mario there last year sans dog and they loved taking off their shoes and playing in the shallow creek. Quite a number of dogs jumped in with them while we were there and that’s what reminded us that it would be a good place to take Rocco. It didn’t disappoint. Rocco loved being off the leash and running through the damp leaves, picking up tiny sticks, and braving leaps over baby branches pushed easily by strong winds. Mario gave him a run for his money running ahead of him in a mad sprint to see if he could catch up. 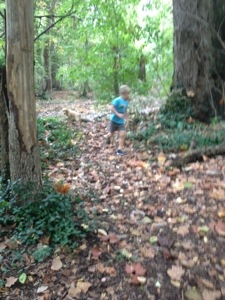 Maria has soaked in the spirit of her late Grandpa Bill and her uncle Jorge; she wanted to take pictures galore of all the glory in the woods. 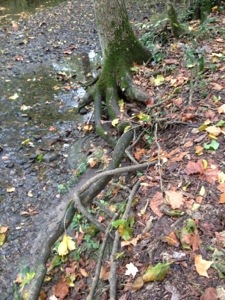 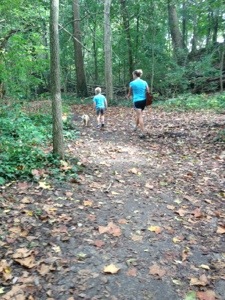 We arrived at our destination – a cascading, slate waterfall with mid-calf length pools of water on each end. The shoes immediately came off and the kids became one with the water – literally. Maria laid on her stomach and immersed her whole self. As I watched her, I witnessed pure grace. The way she lifted her head to the sky and closed her eyes as if soaking in all the beauty of the woods with one long breath. 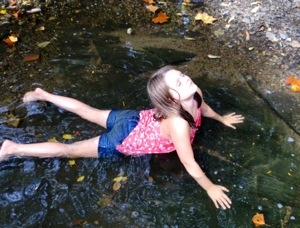 And then Mario interrupted the tranquility with this face: 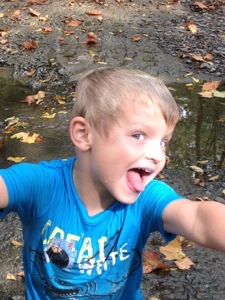 And so we moved from spirituality to frivolity with the help of Mario and Rocco who proceeded to flip out when he noticed Ri and Mario in the creek. He is still a bit shy about swimming so he expressed his displeasure with them going in without him by barking like a rabid mutt. It scared the heck out of Mario. But eventually he settled down with the lull of treats and even jumped into the very shallow end. In a hilarious move, he walked right on Ri’s stomach and used her as a log to protect him from the mean waters. 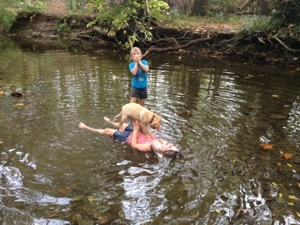 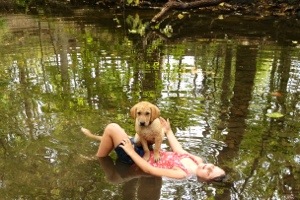 An 80 pound black lab visited us at one point in the afternoon and Rocco was beside himself happy. He played with her for 15 minutes straight not at all scared of her size. He even tried to make his moves on her but she was unimpressed (note to boys, jumping our leg does nothing for us).
Nature brings out curiosity and playfulness. You can’t help but jump from rock to rock and pick up the giant leaf resting in front of you to compare it to the size of your hand. 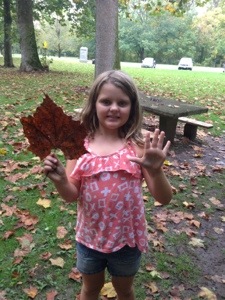 You can’t help but stand on a boulder and belt out a song about love (yes, Ri and Mario want to be on the Voice badly). 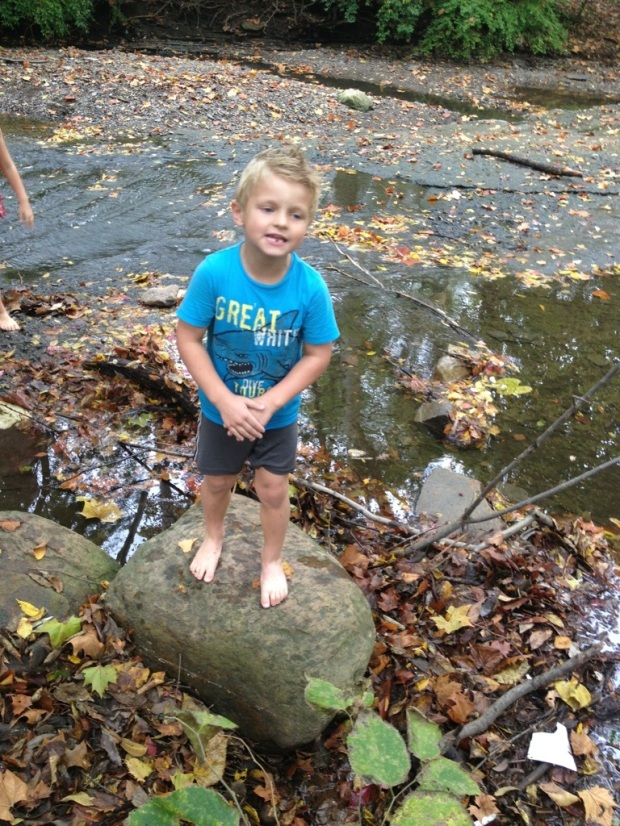 You can’t help but strike a silly pose when mom begs for a darling picture of her babies. 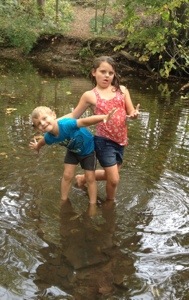 And you can’t help but plant a big ol’ smooch on your brother as you play in the creek together. 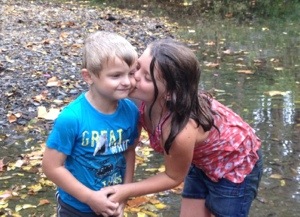 Ok, there are some things that even nature can’t make right! 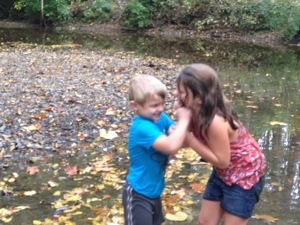 We have no choice but to make this our regular nature outing – how could we say no to a face like this? 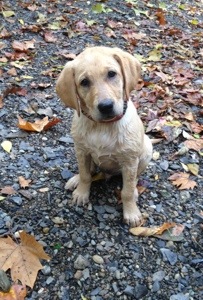