One ninja zombie and one valley girl showed up before my eyes when I walked into school Thursday for the Halloween school parties. Some other mom was helping Mario into his costume and an irrational streak of anger jolted through me. “That’s my kid”, my jealous self thought. But then he looked over at me and exclaimed “there’s my mom, she made it!” Yep, work can always be put on hold for that type of reaction; I gently shoved the mom aside and took over wrapping ninja yarn around Mario’s head.
Mario and his boy friends were jumping all over the place and play boxing while the girls were standing around watching. It was a hoot trying to get them to pose. The boys kept punching each other and the girls kept giggling. 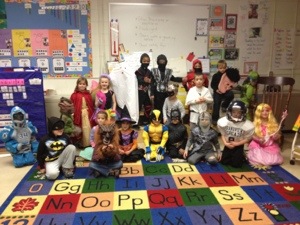 Meanwhile, my girl was in the bathroom with her other third grade classmates getting ready. Aunt Sarah and Jorge were helping her out (blue eye shadow and pink lips to add to the costume). I met up with her after I walked the parade route with Mario (who highly complained about the parade being termed a parade: “this is simply a walk around the block, mom, not a parade with music and lots of people!”). Ri was adorable with her 80’s self.

The rain started coming down right when we hit the school doors – perfect timing. I stayed with Mario in his classroom since this was his first grade school Halloween party. He was grouchy as heck because he expected candy and games and running around thanks to his sis who had given him false hope that his party would be all that. What Ri failed to understand was that I brought in cupcakes and sugar and crazy games because I’m a sugar nut whereas the moms in charge of Mario’s party were wholesome and nutritious and brought in bananas with raisin eyes and did spider crafts. Mario sat pouting as his spider legs wouldn’t glue correctly and his scissors wouldn’t cut well and he was forced to sit in his chair. But then a cupcake appeared with an Oreo on top and life was good again; he even smiled for a picture with his mom!

Meanwhile, Ri partied it up in her classroom. Sarah and Jorge stayed for a bit but then felt like Ri wanted left alone with her friends so they hit up Stauf’s. A while later, Ri came down to Mario’s room sad that I wasn’t in her room with her. She’s had three straight years of me all to herself. Nonetheless, after she saw how down Mario was, she was her generous self as always and told me I could stay with Mario. She stole a candy corn from his table and bolted back to her room.

Bethany met us back at the house (we were soaked from just getting in and out of the car). Mario threw off his shoes and played Star Wars Wii and Ri threw on her robe and played Minecraft. I headed into work for a quick meeting and prayed the rain would stop by 6. No luck. I got home at 5:30 and Sarah and Jorge had the kids ready to go. We threw on our rain coats and headed up our street for our first time ever trick-or-treating on our street (we usually head to 2nd Ave.). It was Jorge’s first trick-or-treat experience. Too bad there weren’t more kids out due to the pouring rain – but he did get to witness a human taco. My little munchos were making their mama very happy by ignoring the downpour and hitting up all the welcoming houses.

Meanwhile, Rocco cried and cried whenever the kids walked up the sidewalk to get candy.

We made it all the way to Broadview before Mario started to peter out on us. He was wet and cold – two things he can’t stand. Sarah and I pushed him hard though saying “look at this house here – it will have good stuff!” He held on for a few more houses (he scored big on the last with eight pieces of chocolate) and then Jon rescued him from his misery (Jon got in from England in the afternoon and drove from Detroit back home to make the tail end of Halloween). Maria left with her friend Riley around the neighborhood so Sar and Jorge and I were left contemplating dressing up and getting candy ourselves. Sar could have completely passed as a ten-year old ghost but we forgot a sheet.
We met back up with Ri and headed to Doris and Kim’s house to say “hi.” We saw our old house on 2nd Ave. and got a handful of candy from Doris and Kim. We also saw our old neighbor Carolyn who still sends b-day cards to the kids. She gave Ri a big squeeze (and a lot of candy). Ri and I hopped in the car as Sar and Jorge brought it around to us and Ri gloated as she showed them her loot. A bag filled to the top – just what I had begged for over the last two weeks. Kit Kat, Reese’s, Butterfinger, M&Ms, Snickers… Pure heaven. 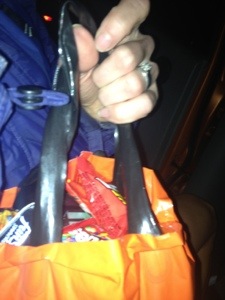 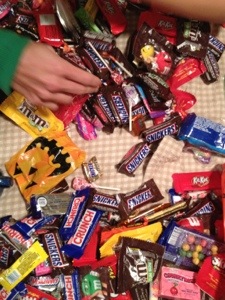 Ri sat sorting out candy for Sarah and Jorge and me while Mario ate his stash. I was concerned about whether this Halloween would be a bust but it turned out to be delightful.

And the kids really got a treat when Sarah and Jorge stayed with them the next morning and played an epic two hour Monopoly game with them. Pure heaven.