And so part one of three has ended of the holiday get-togethers. Christmas and New Year’s are breathing down my neck. But as much as I cringe at the thought of untangling Christmas lights and shopping on-line, I truly love this time of year. People are more pleasant. Someone even hurriedly hopped in his car when he saw me waiting for his space (one if my worst pet peeves are people taking ten minutes to climb in their car and reverse out of a space). Everyone seems to have a good attitude and I get a lot more “hellos” from passerbys.
Because of all this good cheer, I figured I’d add to the spirit and take Ri and her friend and Mario and his friend to lunch the last day of school before Thanksgiving break. Mario didn’t quite understand why I was there since I surprised him. He thought I was taking him home for the day. So what was at first elation to see me turned to sourpuss and pleading to leave school for the day. But after explaining five times over that only big kids get to go to lunch with their mom, he decided he’d take what he could get. Ri and her friend stood at the door anxious for chicken strips and ranch dressing. We headed out to Marshall’s across the street dodging snowballs from the boys.

The fish were a big hit with the boys as well as the pool table. The girls just wanted to sit alone and play music. And eat. 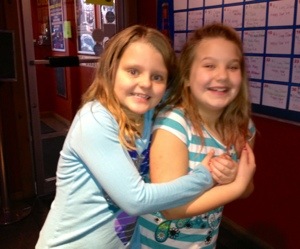 I took the kids back to school and gave Mario ten hugs goodbye. That evening, I addressed thank you cards to everyone that was coming to Thanksgiving dinner. The kids got into holiday mode – they played on electronics and made a fort in our bedroom.
We woke on Thanksgiving morning and drove down to the YMCA to feed some of the homeless men. They already had enough servers so we just went around to the tables and said hi to them. The first man we said hi to was wearing a long sweatshirt. After Mario told him his name, the man rolled up his sleeve and showed us the name “Mario” tattooed on his arm. Too funny. Mario was in awe (and will probably try to get one himself in five years). Next, we went upstairs to where they were hosting 15 women, and made cards for them to place on their chairs. Maria asked what to write and I told her just something nice. I looked over a few minutes later and she had written “Happy Thanksgiving! You are special just the way you are.” What a doll. Mario drew turkeys and flowers on his card. We went back downstairs after the card-making and visited with some more folks. The final man we talked to was from Alabama and he talked about the snakes and turkeys in Alabama. He kept the kids’ attention and had me cracking up. He was hilarious. We left after an hour and went home to greet the Ionno family and my mom and sister. Jon was fast at work getting the turkeys together.
The crew showed up around 1 and the cousins ran around like wild animals while we all slaved over the meal. Actually, I got off easy this year because I kept going outside with Rocco and taking walks with my mom and Lou. Oh, and then there was the obligatory run to the grocery to get more peppadews…(anything to avoid mashing potatoes). However, I was put on clean-up duty. Nonetheless, by the time all the dishes were done, we were ready for pie and ice cream. Homemade pumpkin pie from Patty. Yum. We made sure to sing an extra loud birthday song to her.

Patty gave me a second November birthday present by taking the kids with her back to Marion on Thursday night and keeping them until today. Unbelievable that woman is! She has to help Joe get around all the time now plus she adds on these kids. She is the energizer bunny. And the kids LOVE going to stay with her. They hate coming home even when they are up there for four days. She is a lot of fun though; I’d stay, too.
My sis stayed with Jon and me through Saturday. I can’t believe the two most anti-mall gals braved Black Friday shopping. Sar was determined to get gifts for her in-laws in Mexico so I couldn’t say no. We even got a movie and a massage in before she left!

By today, Jon and I were both missing the kids and ready to squeeze them when they walked through the door. Of course, within five minutes of walking through the door, Mario was whining about his toy not working and Ri was talking so loud you’d have thought her eardrums had burst.