My life is ridiculously good.

I am very lucky. Most days I stop myself ten times over and process this fact. Is it my culture transformation work I did at the university? Is it that I’m getting older and with that gaining a fuller picture of what it means to be happy? Is it that all the self-help books I read in my 30’s have finally hit home?

My weekends with the kids rarely disappoint. They are at ages now where they are able to play on their own or with each other but they also still want to hang with me and go to the park or take a bike ride. It’s perfect: I can get fully caffeinated, brush up on world events by reading my Times, and then later engage in a full-blown pillow fight.
And I love how their minds are developing; it leads to really awesome questions ranging from the benign – how are sidewalk made – to the sublime – why do we go to war. Mario points out things he sees in books we read together that I would never notice. Ri continues to practice the art of compassion by never judging others – the other day I about cussed out a young guy who cut in front of me in line at Kroger’s and she pulled me aside and whispered “mom, he may have somewhere really important to be.”

Yesterday was another day where I stopped myself over and over amazed at how wonderful I had it. The day brought wonderful near-Spring weather. The girls took a bike ride while I walked Rocco. We got a picture on the same rock we took a picture on when Rocco was a pup. Ri was very excited about that! 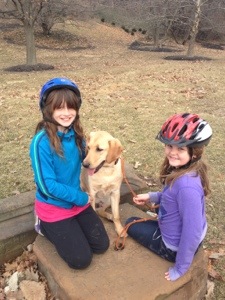 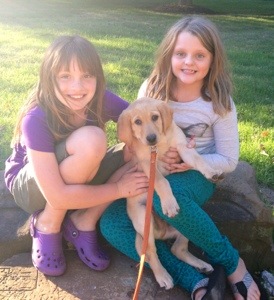 Mario met us at the park and the kids decided it was time for Rocco to adventure down a slide. Their eyes about popped out of their heads when he did it. 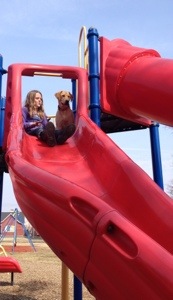 I love this picture of the kids running with Rocco. It’s a perfect depiction of the joy of warm weather.

And this is the perfect depiction of Ri laughing hysterically as she tries to catch up with Rocco! 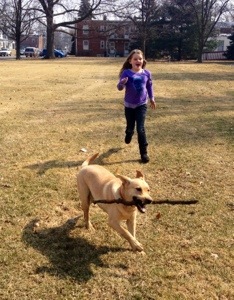 Love love love these beginning days of Spring.
Next up, a trip to the river where Ri and Mario and I used to go on Sundays to collect rocks. It was closed for a year to create a bike path and I was anxious to see what the trail looked like. We piled in Stephanie’s van with the pup sitting next to Ri and the boys carrying their weapons (in case we encountered zombies) and headed down the street. We parked at the gas station and unloaded. What a sight. 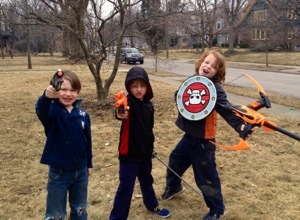 The bank where we used to collect and throw rocks was still ready for us. But it was rather insane trying to make sure the kids didn’t fall (there were huge boulders lined up where there used to be gravel). Rocco added to the insanity by trying to jump in the river; Mario screamed like a maniac for me to hold his leash because “he didn’t want his dog to die!” So, I held him as he pulled me all over the rocks while I held Paxton to ensure he didn’t fall. Good workout.
The kids found great hide-outs made of sticks and leaves (I didn’t inform them that homeless folks probably used these “shelters” because I didn’t quite know how Steph would react but I did feel compelled to talk to M&M later that evening to help them appreciate the struggle all people face at times). The boys played capture and the girls played dorm room (whatever that is). 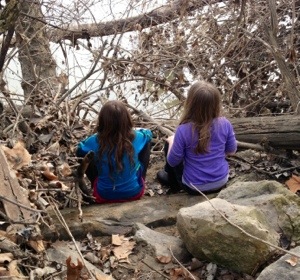 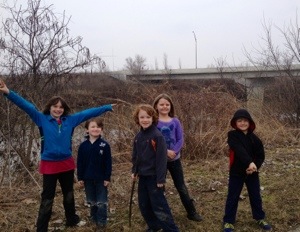 The kids found a big rock pile on our way out and I asked them to pose as savages. All complied except Mario who continued to laugh like a hyena! 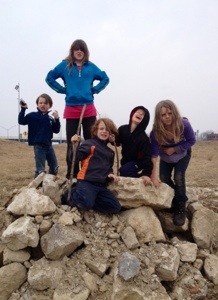 In order to get them to leave, I had to promise them a snack at the gas station. They booked it after that promise. The boys got chocolate donuts (they slipped me one in thanks) and the girls got ice cream cones. They were happy as heck driving home.
We ended the night watching my girlfriend’s kids. A six week old and two year old who I had never met… Huh. I was a bit worried. But it ended up being absolutely joyous. Ri was excited all day to hold the six week old, Emerson Lois. She kept asking “when will it be 5:30?!” Mario kept telling me he didn’t want to babysit. But when they dropped off Miles, Mario took to him like sugar. He threw the ball with him and led him around his room to play. It was precious. And Miles couldn’t be more chill of a kid. He just followed Mario and played with whatever Mario gave him. He never cried once (kudos go all to Mario!). 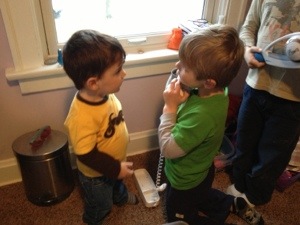 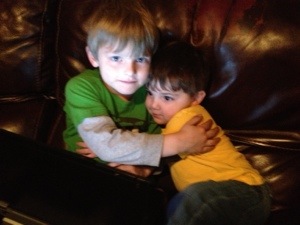 He taught him how to crawl up the stairs so he wouldn’t fall down and how to beg for (and receive) a cookie. He was so compassionate and sweet with him. Warmed my heart. 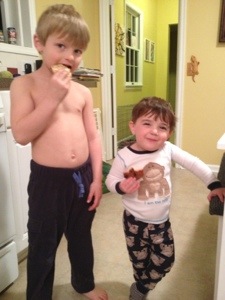 And Ri was, as I knew she would be, a doll with Emerson. She laid with her and held her and couldn’t wait to change her diaper. Emerson is a real life baby doll! 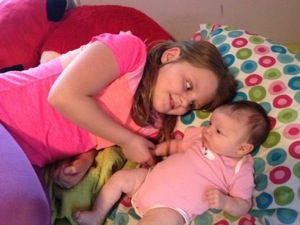 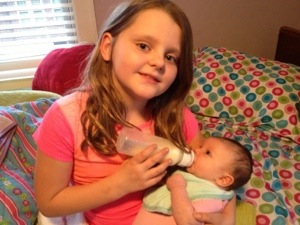 Emerson pitched a little fit at one point and I had to put her in her seat while I got Miles’ dinner. The next thing I knew, Ri had her quiet by rocking her back and forth. She also had picked up the mom talent of multi-tasking as she rocked the baby and read a magazine – love it! 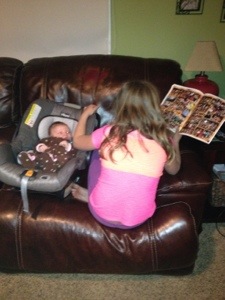 I sat at the kitchen table when my girlfriend left with her kids and my kids and Jon had gone to sleep and felt engulfed with gratitude. Another day full of laughter and sunshine and good kids and nature and a tired pup and chocolate donuts. Really, it doesn’t get any better.