Maria and her girlfriend Anna are on a mission to California. They are thinking of all sorts of ways to raise money to play for their airline tickets. I arrived home from work to find these two out front hosting a lemonade stand. They had made yellow lemonade and pink lemonade. Maria’s pink lemonade somehow warranted a greater price – $1.50 – than Anna’s yellow lemonade which was $1.00. Anna placed herself on the sidewalk and shouted “lemonade here! Get your lemonade!” Ri giggled. She’s not as front and center as Anna; she stays behind the scenes and collects cash. I purchased a pink lemonade and their eyes stated at me as I swallowed it. “Delicious” I pronounced (even though it was rather diluted – they can’t be skimping on lemonade powder when charging $1.50!). They both smiled wide. After about fifteen minutes, they came in for Rocco. “We need something more for customers. They not only get to buy lemonade; they get to pet this sweet dog!” Little Rocco was a good sport and sat next to them while they tried to retrieve customers. Sam from down the street came down (what a doll) and taste tested both kinds. He chatted it up with them – asking questions and making comments about their sign. Maria blushed and smiled while Anna chatted away with him.
They earned $10.75 by the time I made them pack it up (they rung in Mario as their last customer but he wasn’t as gentle as I was (“this lemonade is awful!” – the girls didn’t care – they had his moolah!). Maria informed Jon and I that Anna was keeping the money because she was planning out the California trip. Jon questioned her about that choice and asked whether they should split the money instead? Maria didn’t flinch in her response: “Anna can keep it all.” A trusting soul, she is. When I put her to bed last night, she asked if they could set up shop up the street next time so they got more people to pass them. It looks like she really wants to head to California. Hey, at least she still wants me to come.
> 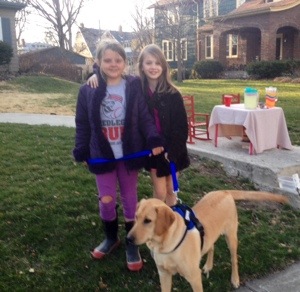