Cake Walk 2014 kicked my butt. I don’t know if it was the opening and closing of the festivities or the loud band music and even louder kids, or the chocolate cake we devoured once home.
Maria went with her friend, Kathryn since she had a play date with her after school. This year she continued to step one foot closer to teenage-hood. She came to see Mario and me only a few times and it was only to ask for money and water. She hung out with one group of girls for a minute and then others the next. I likes seeing that.

Then she found our next door neighbor who is Grandview’s baton twirler and stood with her to try to learn how to twirl. She must have stood up there for 30 minutes.
> 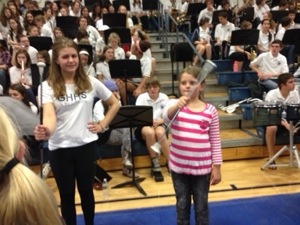 Meanwhile, I should have left at 8:30 to head up to the event with Mario because he would have never known what time it started. I gotta take advantage of his youth while I am able. And all he wanted to do was play the kids games and all I wanted to do was try to win a cake. Guess who won?
> 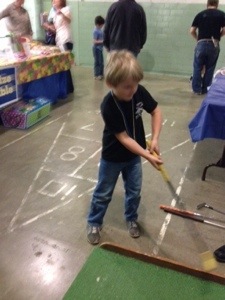 He played the golf game again and again. Then he moved onto the football game where the volunteer was absent. All the kindergarten boys were loving the freedom of that. Soon a volunteer showed up so we moved to the lollipop game. Such anxiety each time he pulled a sucker out to see if it had a blue tip or not. He moved to the treasure chest and scored these dandies.
> 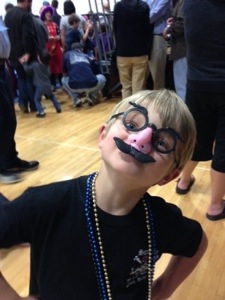 Then we hit the baseball pitch. He was allowed to stand on the line closest to the catcher but refused. He wanted to stand where the older kids had to stand. And don’t you know he got a strike on his first pitch.
>

Ri kept trying to win a cake but to no avail. I finally got Mario to head down with me and try to win. After three more hole-in-one attempts, he finally followed.
There was Ri standing in line with Kathryn and Evie. She smiled when she saw me and waved (at least I still get that). Mario and I went to another line and danced to the music as the band played. The music stopped, we sat in our chairs and hoped. Unfortunately, our numbers weren’t called. Mario got livid last year when this happened but this year he brushed it off. We stayed for the band’s last tune and although we didn’t win a cake, we bought a sweet blue one in the form if a mustache that Kathryn and her mom had made. And we dug in at 10 pm when we finally got home.
>