Ri wanted to take some girls out to lunch for her birthday this week and the only day we could do it was today. I thought rather than spending $100 on Panera (which is seriously what it would have cost between smoothies and meals and desserts), I’d buy a pizza and take them back to the house.
What a hoot it was to watch them. They are a more calm goofy than Mario and his buddies. One thing that both cracked me up and scared me too death was this scene: 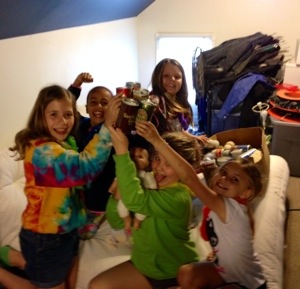 These are Jon’s old beer cans he has collected since he was in his 20’s, and they found it hilarious to act like they were drinking out of them. I have a feeling I may get a photo just like this one when they are home from college and having a summer reunion.
I loved that they devoured the entire large pizza and them devoured the candy and cookie jars while we sang happy birthday to Ri. They have no issues with taking down some grub and I hope it stays that way.
>

They still enjoy playing with barbies, and we’re laughing about how messy Ri’s room was – I told Ri it’s pretty telling when her friends say her room is messy! Still didn’t faze her a bit though. We topped off the lunch with candy and leis, modeling, and lots of laughter and singing in the car on the way back to school.
> 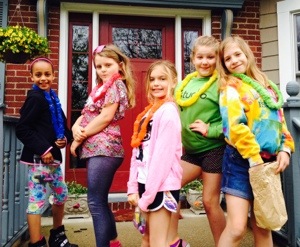 Got ’em back to school a few minutes late but I have a feeling that they will be able to schmooze their teacher and avoid trouble….>