I first learned of the Women’s Fund when I got an email that Gloria Steinam was a guest speaker at one of their events. I admired Steinam and had read essays and speeches she had given. I knew she was a crucial voice in the women’s’ movement and that my mom had admired her as she grew into her own in the 70’s. My mom had also gifted me an autograph from Gloria Steinam to me after my mom attended an event with her in the early 1990s. I hadn’t given that autograph much thought since I had received it from my mom in my early 20s. It was stored away in a box with other childhood items. But when that email came across, something jolted in me.
I went home that evening and found the framed autograph. I’m sure I played with Ri, who was not even two at the time, and fed her dinner, and rocked her to sleep for hours. And then I made it downstairs to my computer, and typed in my Visa number to make a contribution to the Women’s Fund. They allowed you to write a tribute and so I did: to my mom for introducing me to Steinam and feminism and belief in self and hard work and equality. I thanked her for helping to make me a strong and loving mom to Maria. A few weeks later, I got a call from the Women’s Fund. They asked if I’d make a video of my tribute to play the night of the event. I was flabbergasted and thrilled. And immediately agreed. As I prepared my words to my mom, I brought out my framed autograph and hung it in Ri’s room. I believe there was a surge of power that entered her room when I hung it over her dresser that night. I think she felt it, too, as she squealed (or it could have been gas, but that’s not as riveting).
When I went to shoot the video, I had a plan. I was going to ask if Gloria Steinam would autograph the Women’s Fund invitation for Maria. How awesome would that be? There was no way that Ri could be anything but a strong, powerful, aware woman with two framed autographs from Gloria Steinam! And because Gloria Steinam is the incredible woman she is, she agreed. And Ri now has two autographs hanging on her wall.
Fast forward to a week ago – May 1, 2014. One day before Ri’s 9th birthday. I got to bring her as my guest to the Women’s Fund Keyholder event with Ashley Judd as the speaker. I explained to Ri about the Steinam autographs, about my commitment to helping women in need, about women supporting women, and she soaked it all in. She ran around City Hall’s grounds and posed with statues before we met up with her girlfriend and her mom. 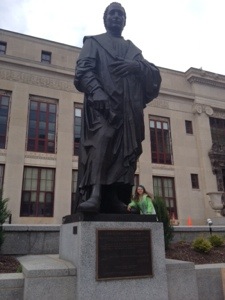 We sipped on smoothies and talked about Ashley Judd (since the girls had not heard of her (when Ri read about her she was flabbergasted that she made a movie in 1995!)).

While waiting on my girlfriend outside of the Ohio Theatre, Maria spotted a local news anchor from NBC 4 (her favorite weekday morning show). She pulled at my sleeve in awe.
“It’s Mikaela Hunt, mom!”
We walked over and Ri said hi to her. Ms. Hunt asked her some questions and Ri answered shyly. As we walked away, she stopped. She wanted her picture with her. We walked back and asked and this picture was taken:
> 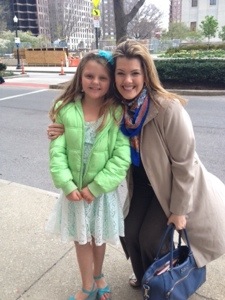 She was charged up. And she stayed that way throughout the night. They had videos in the beginning of the evening of women and girls talking about themselves and at the end of the clip, the women and girls would fill in a word on a blackboard that read “I am ______.” One wrote “brave”, another wrote “kind.” It was powerful, and I whispered to Ri that she was all those things.
Ashley Judd surprised me with her humor and grace and humility. I thoroughly enjoyed the discussion. She spoke of her humanitarian work and how overwhelming it can be to feel like you can’t do enough. She’d go back to her hotel room and sob in despair. And then she met a guide who clarified for her that she can only do what she is able and what she’s doing is powerful and effective. And she reminded her that she needs to make room for those closest to her because it’s only when we nourish those relationships with partners and kids and friends that we can truly give and feel satisfied giving to a range of others. That hit home for me. She was genuine and funny and inspiring.
At the end of the event, they asked for donations. Ri and I took the envelopes out of our bags. I explained to her what you could do with a donation, i.e., make it in honor of, or in memory of, someone. She brushed me away and said “I got it mom.” She then asked me for a sheet of paper. I looked over in the corner of my eye and saw her writing blank lines. Because she’s Ri, and so thoughtful, I had an inkling she was doing something for me. She bundled up the paper and put it in the envelope and gave it to me (she didn’t quite understand that she was supposed to add a Visa number and give it to the folks at the doors as we left). She told me to wait until we left the Theatre to open it. As we walked down High Street towards the car, I opened it.
>

She had written all the adjectives that she believed described me. I was taken aback by her gesture and did the only thing I knew to do: capture her in a huge hug as tears formed in my eyes.
“No crying is allowed tonight, mama! Wipe those eyes and put on a smile!” (She’s got a lot of her dad in her). I listened to her and put on a smile as we posed by the statutes and giggled at each other on our way to the car. I am blessed with a strong community of women by my side between my moms and aunts and cousins and grandmothers and friends and colleagues. I am grateful for the women power at the event that night and for being able to allow my daughter to absorb it all. She clearly fit in perfectly.
> 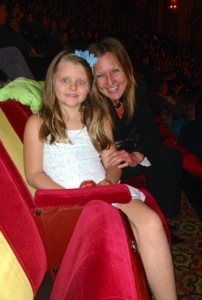