I can’t remember how we got on the 80’s while eating dinner this week but it led to much laughter and some crazy outfits.
Jon told the kids that it would be 2014 outside the house but inside the house we were reverting back to the 1980’s. There would be no iPads and no cell phones. Our phone would be attached to a wall and you could only walk five feet away from it (Maria did think it would be cool to have a wall phone (Aunt Julie has one!) but she was not enamored with the thought of no iPad or Google. Mario was fascinated with the entire concept of going back to the 80’s (he clearly didn’t process the “no technology” idea). Jon described the outfits we wore in the 80’s: girls wore neon and fishnet and their hair in a ponytail on the side of their heads. Boys were penny loafers and their collars up and white pants and suspenders. Mario asked what suspenders were and Maria responded “they are like belts that clip on your pants and go over your shoulders.” Love it. Jon showed them images of clothes from the 80’s and Ri was appalled. She made it clear she did not want to go back time. Jon kept ribbing her and she finally blurted out “you wanna see 80’s? Mario and I will show you 80’s!” They went in the house for ten minutes and these two 80’s babes walked out.

Jon and I laughed so hard. Ri asked what the sayings were in the 80’s and we named a few: “grody to the max”, “totally”, “dude”. They started saying them to each other.
> 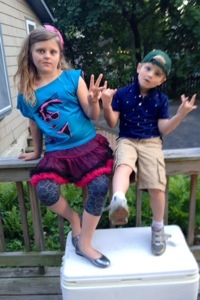 They were fascinated that we had to “dial up” to get any internet and then it would take 15 minutes to connect. They could not fathom telephone booths. They had no idea what the Dewey Decimal System was and why you’d ever use a card catalog to look up a book. They cracked up at the thought of a show called “The Love Boat.”
They were absolutely flabbergasted as to how we survived, much less liked the 80’s. Little do they know how much they would have fit into the 80’s era – Ri with her love for partying and music and Mario with his dance moves and fashion sense. They are clearly just jealous.
>