It is baseball/softball season in the Ionno household. We are in full swing this month with Mario’s games on Friday nights and Ri’s games on Wednesdays and Saturdays. Mario is still in tee-ball even though he was not happy about that deal. He wanted coach-pitch this year (“babies hit off tees,” he said to me after I signed him up.) He does have a heck of a throw on him – he throws it back to the coach and nails it nearly every time. And he has some buddies on his team and on opposing teams so he has fun.
) 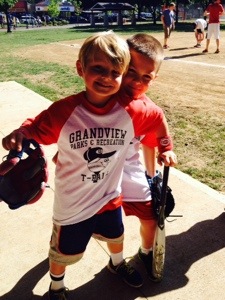 They still all move in one big mass when the ball is hit in order to try to be the first to get the ball. It is no holds barred with elbows and kicks being used at any cost. And rarely does anyone cry about getting hurt – if this behavior happened in any other setting, it would be chaos but there is something about a ball field that makes it tolerable.
Mario got to play 1st base on Friday night. He needs to work on scooping up the ball but he was ready for it every time. I love watching him play. He hit some good balls, too. He loves to hit last so that he can run all the bases at one time like he got a home run. Very Mario-like!
After his game, he asked if I could coach his team next year like I coach Ri’s now. Warmed my heart that he’d ask me. I don’t know how I will swing both but I will find a way after that request.
He and his buddies partied it up after the game. They played keep-away and tackled each other to the ground. It took all our might to make him leave. But he had a sis that was dying to get to a swim party so she put down the gauntlet.
>

Ri had a game on Saturday. Peepaw and Mama Meg came in to watch it. I get so anxious watching my girls play – I want them to play well and win so badly. They are all making great strides in their playing. The defense is making outs and we have a girl who could not hit to save her life getting hits! The girls are great about cheering each other on and patting each other on the back when they miss a ball or strike out. That was one of my goals – learning teamwork – so if all else fails, we accomplished that one.
>

Ri had a great play at third on Saturday – she scooped up a grounder and tagged third for an out. She scared me because she was confused at first about whether to tag the girl or the bag and when she went running for the bag I was worried the girl would pass her (she’s strong as heck but not the quickest!). But she got an out and she was charged up because the girl she got out was the girl who had gotten her out the previous inning! Little did I know that she likes her some revenge!
But what she likes more are after-softball hot dogs and ice cream. Those girls run for the concession stand like bandits!
>

And, of course, she loves having visitors cheer her on like Peepaw and Mama Meg (even if they are carting two mattresses in a flat bed truck to the game!).
>