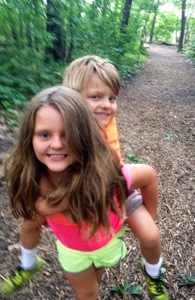 7 am.
Ten years ago it would have floated by without notice or care. My pillow under me, Jon by my side, maybe a dream wrapping up in my rested head. Today, the house is bustling with kids’ footsteps up and down the steps, laptops chiming hello, and a pup barreling onto the bed for morning kisses.
Jon rescued me Sunday morning and escorted Rocco downstairs with the kids. That lasted ten minutes before we heard the charge of Rocco through the hall, up the stairs, and to our room. I lazily climbed out of bed, got dressed and lumbered down the steps with Rocco pushing his nose into my leg right behind me. The kids were on the couch playing Animal Jam on the computers. I gave them the “I am not happy you are on a computer and not taking care of a Rocco” look and they both closed the computer tops and pronounced “we want to take a walk with you!”
Ri got her scooter. I got the stroller for Mario in case he got tired of walking (the BOB is still our tried-and-true even though Mario is almost seven years old). We got Rocco and headed to the woods. We walked into a chirping, vibrant forest and I was elated to have my babies with me to experience such early morning goodness. They immediately dashed to the climbing tree and Rocco immediately whined and cried as they climbed the tree. He gets whacked out every time they scale it and watches them intensely until they are back on ground. 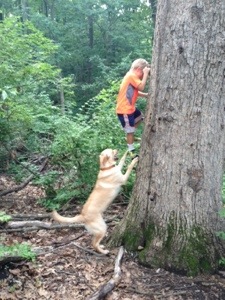 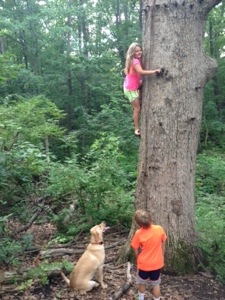 Mario and Ri went to their second favorite tree that leans way over to the side. They love to climb it. Mario decided he was going to jump off of it rather than have me help him down. All I heard as I walked out of the meadow with Rocco was “MOM!” Ri was helping him up and he was holding his back. Great, he’s broken his vertebrae. But he shook it off for try no. 2. Here’s how that try went:
> 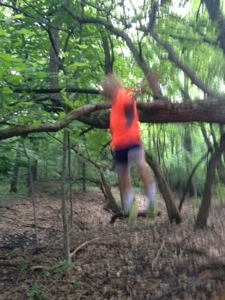 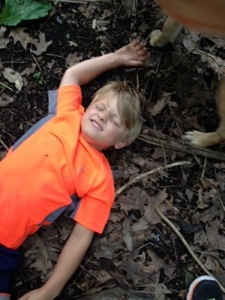 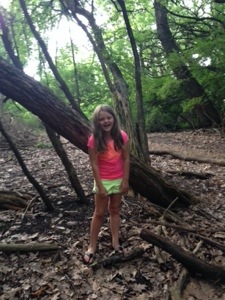 Mario jumped.
Mario feigned death.
Ri laughed hysterically.
Lovely.
We picked him up and they both went up the tree for one last hurrah before leaving for Stauf’s.
> 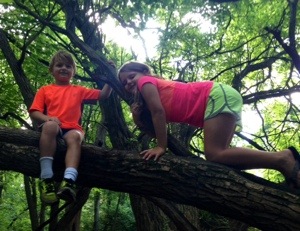 On the way out of the woods, Mario complained that his back hurt. Maria exclaimed “I’ll carry you little buddy!” He hopped on her back and the hysterics began. Rocco chewed on Mario’s shoe and Ri tumbled every other second. What cuties.
> 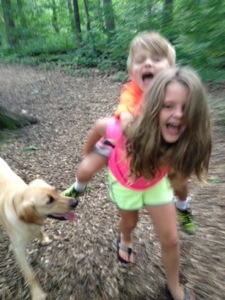 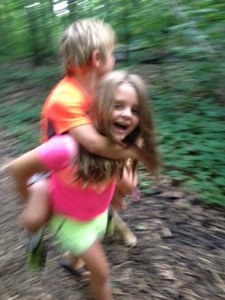 We walked up to Giant Eagle and the kids went in while I held Rocco (who again whined like a baby when they left). I gave them my Visa (they are so independent) and they got a bag of grapes (they had to eat a handful before a donut) and two donuts. Stauf’s was trumped by GE donuts.
Next we headed to the church park. Mario freaked about Rocco climbing the jungle gym set. He worries like heck about that dog. He was nervous about him getting lost at Park of the Roses, too. He doesn’t worry about jumping from a tree but he worries about his pup. And Rocco worries just as much about him. Mario began to swing and Rocco dashed over and jumped on the swing as Mario swung up. Mario got scratched good. I yelled at Rocco and he came to his side immediately. “It’s ok, mom. He didn’t mean it.” He has his back.
We left the park and talked about zombies and softball pitching on the walk home. Ri promised Mario she’d take care of him as his nurse when we got home because he banged his knee at the park. I carried him upstairs to his bed and she brought band-aids and the computer to him. She fetched him water and listened to him talk about his animals on Animal Jam.
Meanwhile, I went down to sit on the deck with Jon and play gin rummy. He whooped on me but I enjoyed just hanging out with him in the shade of the trees.
Pretty nice Sunday, I must say. And all of this before 10:30 am!>