I find myself feeling grateful so very often these days. The gratitude
is down in the core of my being – entrenched and unmovable. I find myself getting worried about losing the feeling because that would suck, I think to myself when I get caught in my “what can I worry about today phase.” I can’t remember a time in my past that this sense of gratitude was as strong, and I want it to stay. It makes me calmer and more content and more compassionate.
The kids and I went to Cincy on Friday to visit my mom over the holiday weekend. I had memories of Ri as an infant and me heading down on a Friday after work to sleep for an entire night while mom got up with Ri every two hours. And memories of Ri and Mario playing in the Timbers pool while Grandmas Heile and Menkedick sat on the side of the pool belly laughing at their antics.
We brought Rocco with us which ended up being great. He played nicely with Lou. We were going to leave him with Jon but when we went to load up the car, he ran out and hopped in the trunk and refused to budge. We even yelled “Treat!” but to no avail. He did great in the car. Just stared our the window and laid down. Stared and laid down.
We hit Blue Ash pool even though it was freezing. Mario and Ri loved the slide. They showed off their swim strokes to Grandma Lolo. Then we headed to the baby pool for old times sake. Besides, it was 20 degrees warmer. Aunt Julie came to swim with us and revved things up with her energy. She grabbed Ri and I to go off the diving boards. She got everyone in line – from old to young – to play follow the leader. We were doing splits, touching toes, you name it. Hysterical. Ri watched her aunt in amazement. Julie even went down the slide with her. TMF – Julie’s signature letters for “too much fun!” 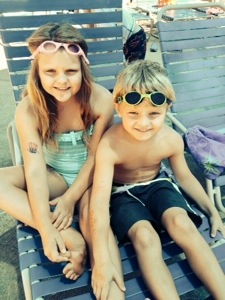 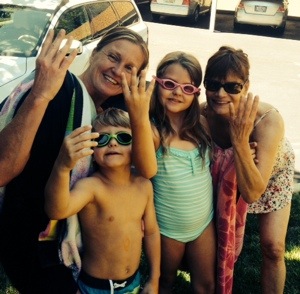 As we headed to the car, Julie announced “I’m sitting in the way back!” Ri and Mario pleaded to sit with her for the half mile way home. Hysterical.
>

When we got home, Grace was back so the kids played downstairs while Liz and I caught up. That lasted a while but then they begged to go to the park. I love Blue Ash park so it was not hard to convince me. Plus Grace-bug is irresistible.
> 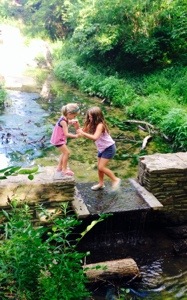 We arrived home to pizza and a little Walking Dead for Mario and Grandma Lolo. It was just like old times (minus the Walking Dead!).
> 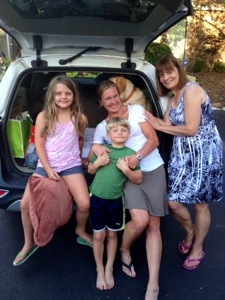 I drove home with two happy kids in the back seat, an exhausted pup in the hatch, and the contentment of a day well spent.
We woke up on Saturday morning and headed right back out again. This time Jon drove. He dropped us off at Riesbecks and headed to big Mario’s to do farm chores. The kids and I went to the farm to visit baby girl Elena. She is growing like a weed at 9 pounds. Her face has changed from a newborn face to an infant face in the matter of two weeks. I could not believe it. And her little thighs had some meat on ’em! M&M were so happy to hold her and love on her.
> 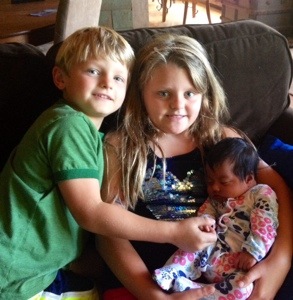 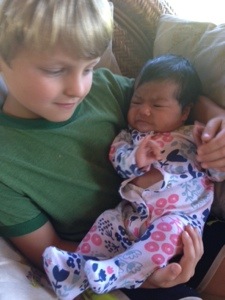 Elena even opened her eyes for a while and took us crazy Menkedick Ionnos in full force. It’s precious to hear her cooing and sighing and breathing on you. She is vocal – there is no doubt she will voice her opinions just like us Menkedick gals.
Ri begged to stay out on the farm. She wanted Mario to stay, too, but he wanted to come home with Jon and I. Ri was not swayed; she had no issues waving goodbye to us.
Jon drove Mario and me home. Mario watched Willy Wonka and I read some Vela. Every few miles I’d glance over at Jon and a smile would form on my face. And the awesome feeling of gratitude swelled through my core.>