A cousin wrote on Facebook that she’s amazed at the number of people who have never been to a wedding. After all, she’s been to 16. It got me thinking of the reception that we went to on Saturday night near Toledo.
Jon and I had been so brain dead since our Great Wolf Lodge trip that we had not watched the news in two days. It ends up that Toledo had a water problem caused by algae and people were driving 60 miles south to stock up on bottled water. The reception was almost canceled because they did not know if they could get enough water or make the food for the 200+ guests. That would have been a perfect end to our vacation week – drive 2.5 hours to arrive at an empty reception hall.
Ri got dropped off from her Cedar Point trip at 2 pm on Saturday afternoon. She and her friend Evie rode roller coasters and got henna tattoos and swam at the hotel pool in Sandusky. She loved it. Evie’s mom is a machine for taking them and her son and his friends up there (they left at 6 am on Friday morning!). 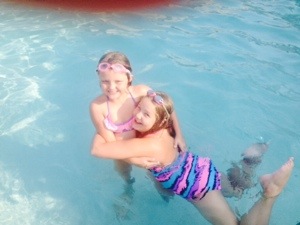 We got our RedBox movies, activity books, markers, food (snacks are a necessity for any trip greater than 10 miles), and sweatshirts (the kids always complain about the AC on the way home) and we were off. Jon and I were pleasantly surprised that the trip only took a little over 2 hours. However, that meant we were the first ones at the hotel reception hall. We had to forego the wedding ceremony (much to Ri’s dismay) because Ri got home too late from Cedar Point. We wandered around the lobby until some other guests arrived. We knew no one. Megan and David (the married couple) were both our babysitters throughout the last four years. We found Megan in 2011 – she watched the kids after school and during the Summer and David took over in 2012 until this summer when he got an internship. Ri idolized Megan. Megan taught her to ride a bike with no training wheels and jump off the diving boards at the pool. Mario idolized David. He taught him how to shoot a basketball and throw a football. They were both great with the kids and I’m sure Ri and Mario will always remember them as they get older.
The Smith family finally arrived. Karen and Adam went to law school with me and have five girls. Karen introduced me to Megan because Megan’s sister babysits the Smith girls. Yea, Jon and I had some adults we knew and could talk to as we waited for the reception hall to open. Ri roamed around grabbing broccoli and dip from the appetizer stations and Mario hung outside waiting patiently for David to drive up. And finally they arrived!
Mario began to run out to greet David. Maria was appalled. “Mom! You can’t let him go out there!” She is definitely the adult in the group. I allowed Mario to give him a hug and then made him come right back inside to appease Ri.
And then the traditional wedding reception activities flowed just like at the many other receptions I’ve been to through the years. Megan and David ran into the ballroom hoopin’ and hollerin’. The DJ played “Let’s get Ready to Rumble” as they ran in – Mario found that so cool. Megan’s dad made a toast and the maid of honor and best man followed. We ate. We cut the cake. We watched the bouquet toss, which Ri viewed intensely (they made the eligibility 18 years and up which bummed her out). We watched the removal of the garter – David had to start from the back of the room and impress Megan enough to take off the garter. He unbuttoned his vest and his shirt as he swayed smoothly towards Megan. They played stripper music. It was hilarious. Mario had his hands over his mouth in glee. And when David went under her dress for the garter, Mario slapped his knees in awe and laughed hysterically. What he’s learning….
Then we had cake and Mario danced to one of those traditional wedding songs where you all have to move to the left and right and shake….
> 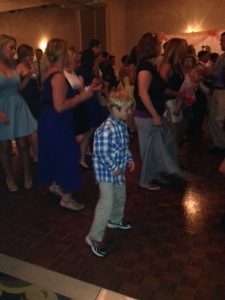 Meanwhile, Ri found the photo booth in the corner of the ballroom, and proceeded to throw on ridiculous props and get her picture taken. Mario caught hold of it, too, and that was the end of any other activity. They begged Jon to do it with them, too, and he let down his guard and went for it.
> 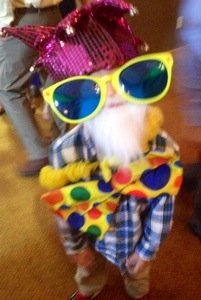 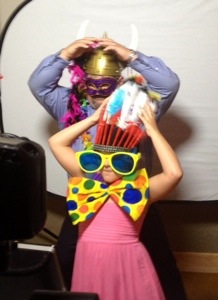 Meanwhile, I ate a second piece of chocolate cake and watched Megan jamming it out on the dance floor. I thought back to my wedding day with Jon and remembered how we engaged in the the same activities that Megan and David did on our day (except I may have been a bit more animated and tipsy…). And how my cousins all sat there on the edge of the dance floor watching Jon and I’s first dance just like Ri and Mario watched Megan and David’s first dance. Weddings are magical, especially to kids.
Jon and I were exhausted as we drove home at 10:30 pm. But we were glad we bit the bullet and made it to the celebration. Megan and David deserved our love and support and they gave more than they know to Ri and Mario that night. After witnessing all the fun and love at the reception and receiving hugs and kisses from Megan and David, M&M left the ball room with first-hand knowledge that life is beautiful and full of joy and not to be taken too seriously.