Jon and I had a great time in Baltimore celebrating our anniversary. His buddy Paul and wife Kelly hooked us up beyond belief. Front row at the Orioles game on Friday night right behind home plate. You could hear the crack of the bat and feel the sting of the ball in the thigh (quite a few bad pitches).I screamed at the Baltimore players with all my might but didn’t manage to get a smile from them (my Reds would have given me some).
On Saturday, we started the tailgating early. Out of the hotel by 9 am (yea, I know there are those up at 5 am raring to go… Not moi). We met up with Paul and Kelly and our neighbors in Grandview (small world) and their family. The stadium was booming when we entered and the Navy boys were impressive as they threw and loosened up on the field – but our guys looked rough and tough when they marched out. The suite had hamburgers and hot dogs and sushi and nuts and more. Ri would have been in heaven with me. Our neighbors’ kids sure were. Jon had fun teasing them and helping one of them create an ultimate burger!

Meanwhile, I had to move around before the game. I was getting antsy after being in that room for an hour. I went down to see the band and the players near the field. I absorbed all the positive energy from the players – so energizing to be near the field listening to music and hearing the crowd. Their were players’ mamas and papas near me taking pictures and beaming about their children.
>

I headed back to our suite about fifteen minutes before the start. The midshipmen assembled on the field and the Star-Spangled Banner played. Gets me every time.
And then the game.
>

It was quite the nail biter at first but then we pulled it out. All were in good spirits afterwards. But we were also whooped. We went our separate ways to rest up before dinner. I took a walk to check out the inner harbor and to wake me up (if I nap, I’m worse off).
We went to Little Italy for dinner with Paul and Kelly. We ordered a magnificent bottle of wine and had an amazing meal. It was a great way to end the trip.
> 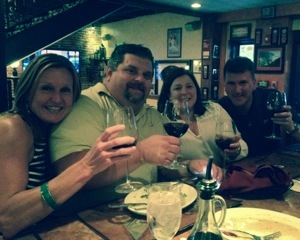 We crawled out of bed at 7 am on Sunday and left for the airport. We arrived home to sheets of rain and kids’ embraces. But then they were off to the neighbors’ house to play. And I was whacked out. Usually I’m happy to get some quiet time and slurp it up but for some reason their departure left me depressed and I didn’t recover all day. Sometimes when I don’t start my day with a run or the gym, I get in a funk, too. So maybe it was that combo that kicked my butt. We had our block party that night so I had to break free from the doldrums. I managed to do so and had a good time talking with Patty and Stephanie. The kids biked and wrestled and “got drunk” on Jones soda.
I woke up and took a seven mile run. I felt much better on Monday. The kids and I cleaned up their rooms. We had four garbage bags of junk and old toys and clothes. How refreshing! Jon worked on their fish tanks (not a fun chore). It was soothing to all be together. But Mario got antsy after a bit and begged to go see Quinn. I gave in after the hundredth plea and let him go. My girl stayed with me though, and helped move her barbies upstairs. Evening came and we got ready for bed at 8:15. I read them a book in Ri’s room and tucked them in.
I took a deep breath as I walked down the steps, and gave thanks for my kiddos and being home.
And the more I thought about my melancholy upon my return home on Sunday, the more I came to believe that it was just leaving Paul and Kelly! They were too good of hosts!>