I have loved watching Ri out on the soccer field. She had practice on Saturday morning. I was supposed to be in a meeting but I called into it instead because I wanted to watch her play. She likes being goalie (just a hunch why – less running). I think she will be really good at that position because she’s not scared of the ball and she’s strong. She did really good at practice.
The girls had their first game yesterday. Holy cow, I was so nervous for her. She’s never played soccer in her life and had only had three practices. I didn’t want her to get in the game and get discouraged if she missed a ball in goal or didn’t kick the ball well down the field. Mama Bear.
She didn’t go in at the start. One of her friends, Gabby, started in goalie. Gabby’s been playing for three years. She knows where to position herself and how to kick the ball to one of our players. She stopped some good kicks. The other team had some tall girls on it. Two in particular barreled down the field most of the game. We played a lot of defense.
Ri got put in for the second twelve minutes of the quarter. I paced up and down the line with my mom who was just as nervous. Jon was able to stay quietly in his seat. How?! The play started and the two tall girls flew toward Ri. There was a mass of our defenders tangling with the girls. Ri didn’t quite know where to place herself. She stood ten feet from the goal post trying to help the defenders when one of the tall girls broke free and kicked it into the goal. My heart sank. My mom sighed. A few minutes later, one of the tall girls sank another one in the net – this time Ri was there but it was hit hard. I cringed. My mom cried “oh no.” Ri looked upset. She wouldn’t respond when I cheered for her.
She made it through the twelve minutes and walked off the field as the whistle blew. She wouldn’t look at me.
“You listen here. You tried your hardest out there. This was your first time as goalie and you didn’t give up! You need to be proud of yourself and tell yourself you did your best. You hear me?”
She nodded. Another mom came up to her and said nearly the same thing. She smiled. She went in two more times as goalie without flinching at the thought. A few went by her but she also snagged a few. And she had some strong kicks from the goal to her teammates. All my nails were bitten to the core when the final whistle blew but I survived. And Ri flourished.
She walked away with a smile on her face (the post-game snack and the camaraderie of her friends helped, I’m sure). I was so proud of her for not giving up and not freaking out. She could have easily cried out on the field when the second goal was scored on her but she shook it off and kept playing. And she could have refused to play goalie again. But she continued.
On the way home, I told her again and again how much I admired her determination and perseverance. I was so proud of her. She nodded and looked out the window of the car but I know she heard me.
It is such a joy to be her mom.
> 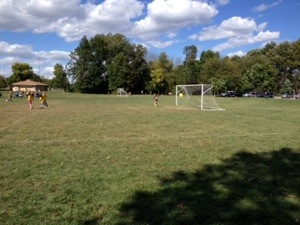