Mario counted down the days for his Boy Scout meeting. Finally, Wednesday arrived and Mario begged to leave for the meeting from the time I got home at 5:45 pm until 6:45 pm when we left. We walked down the stairs to the basement of the church where meetings are held and Quinn came running towards us.
“Mario, look at all the medals you earned!”
He and Paxton and Mario ran to the board where the medals hung.

Mario wrapped his arm around Quinn and I heard chatter between them. Surely Mario was bringing them up to speed on all of his achievements. He was so excited.
>

He sat dutifully as the troop leaders spoke and followed his leader back to the kitchen to work on a project. Finally, an hour later, they presented the medals. He looked so innocent and sweet standing next to the Scout leader while he congratulated Mario on earning so many medals. Then the Scout leader presented him with a certificate that Mario earned at the Shoot-A-Ree for nailing a tomahawk into a piece if wood. He was the only one to do it. He beamed at me. And then he walked proudly back to his chair and showed them off to his friends.
>

He ran over later and showed them to me. He was so incredibly happy. As we were standing around after the meeting, he pulled at me.
“We have to get my uniform tonight, mom. I want to put my medals on my belt and wear it to school tomorrow.”
I explained the store wasn’t open but promised is go there during the week. Thursday came and went and as we were getting ready for bed, Mario asked “did you get my uniform?” I had to break the news that I hadn’t. He got upset and ran to his room. The boy is a Boy Scout fanatic. I promised him we’d go on Friday.
Friday morning brought pleas from Mario to not forget we were going to the store after school. I did not disappoint. Bethany dropped him off to me at the store and we got all the items he needed and more. He left a happy camper.
> 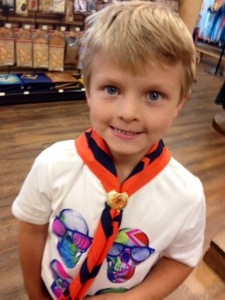 As soon as we got home, he got out his belt and slipped on his medals. He kept asking when dad would be home.
Jon pulled up in the driveway.
When he walked in the door, Mario asked him to stay in the kitchen. He put on his shirt and neckerchief and belt and tucked his shirt into his shorts. He placed his cap on his head. Jon watched in delight.
Our boy.