Jon and I brought in the New Year together for the 16th year in a row. In our beginning years, we’d be at the bars whooping it up. In the mid-years, we were settling down to nights at home in bed watching the ball drop. After the kids were born, we’d be lucky to stay up until 10:30 pm. Then the kids got old enough to understand NYE and we’d make a night out of it by getting snacks and playing games and watching Dick Clark or Ryan Seacrest on tv. Jon and I were looking forward to another NYE together because the kids were away so much this Winter Break. We missed them.
Ri got home early Wednesday after watching Elena at the farm. She and Henley stayed out there for a few days. Each time she returns home from watching sweet Elena, she has two words: “I’m exhausted.” But she loves every minute of it.

Mario returned home after a few days with Grandma Ionno and his cousins. He went ice skating with them and loved it.

Ri and I went out and got some chips and dip and we all planted ourselves down for the evening. We forgot about dinner though so at 6:30 Jon went out for KFC – that’s right folks, we brought in the New Year with chicken legs and mashed potatoes (Mario begged for chicken legs, his new favorite). No high class Mitchell’s for us. Looking back, I think it set the tone for the night…. At one point, Mario was play fighting Jon and wouldn’t stop when Jon told him to so Jon put him in a headlock and pronounced “this is a hillbilly night in this household!” Indeed, between the KFC and wrestling, we were on our way there.
Mario was pissy about not being able to play Call of Duty, Ri was tired and mad that Mario was pissy. I was irritated because I wanted everyone in a good mood and Jon was laughing at all of us. We got out the game of Life and started to play. But this was the look on Ri’s face.

Mario’s wasn’t much better and he wouldn’t look at me.

Then we heard a knock on the door. Quinn asked if the kids wanted to go down to his house to eat NY cheesecake and dance to a few songs. They both agreed and headed down. I told Stephanie to send them back by ten. I thought maybe friends would liven them up.
They both came back a half hour later looking sullen.
“We just wanted to be with you guys tonight and now we ruined it by going to the Markle’s house.”
They are crazy kids. We resumed our Life game and tried to liven them up. But boy they were both exhausted to the extent that Life didn’t even liven them up. Ri laid on the chair and Mario, Jon and I sat on the couch. We watched a little news and some awful NYE coverage on NBC, and looked over to find Ri passed out. Jon prodded her but it was no use. She was out cold. 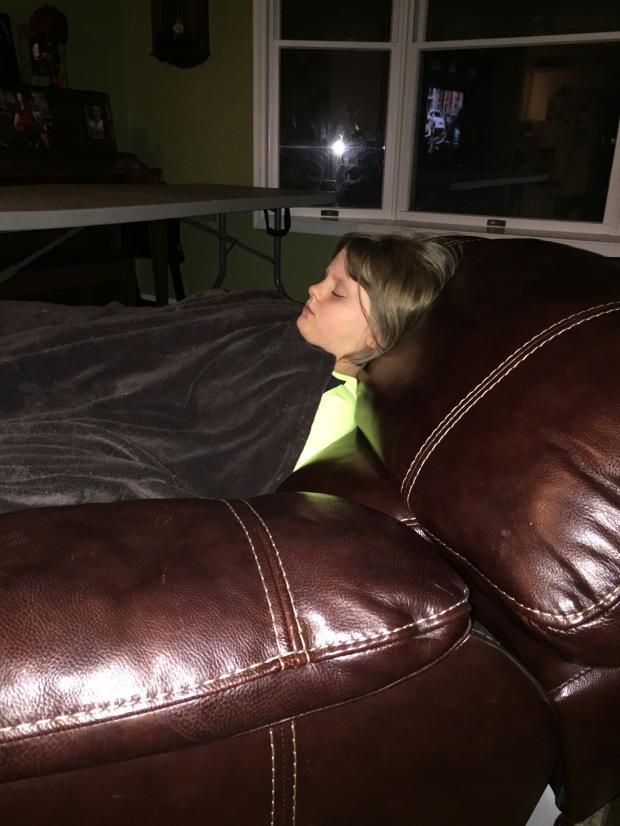 Meanwhile, Mario was trying with all his might to stay up in order to get the dollar Jon promised him. He had heard the story of Uncle Patrick slapping himself and going outside to stay awake on NYE and he was trying all the tricks. He looked pathetic. 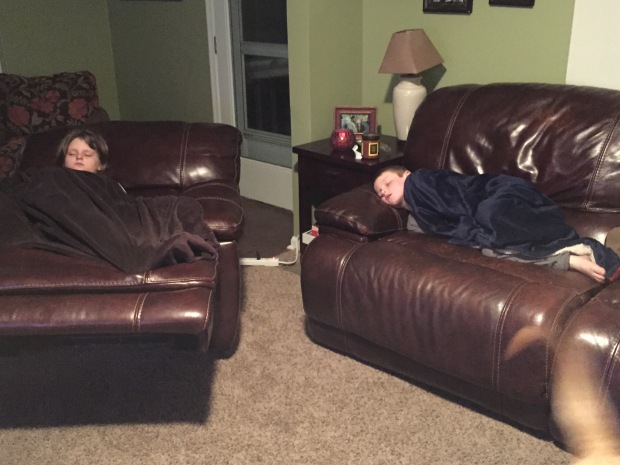 Unlike Ri, he woke up with Jon’s nudging and watched the ball drop – and then promptly fell back to sleep. He was getting that dollar.
Jon and I gave our smooch and hug to one another. Then I carried the kids to their beds and he let Rocco outside. I was nearly asleep when he came up to bed.
And so this year was brought in on a tired note. I was a tad saddened by the lack of fanfare and frivolity as we had in years’ past but with many things in life, my perspective changed after having time to reflect on the evening.
And here’s what I believe about NYE 2014:
It was a night that happened to come after many nights playing with cousins and staying up late and hosting holiday parties. Of course we were tired and barely able to keep our eyes open. Of course we were emotional and susceptible to outbursts about not being able to buy a house in Life. But we were together and persevering through the night together despite our fatigue. We still hugged one another at night’s end, and still woke up to laughter in the morning. We don’t need the pomp and circumstance to bring in the New Year; we are good with board games and potato chips.
In retrospect, this past NYE couldn’t have been more telling about how 2015 will go. This family will continue to grow together; love one another in good times and bad; enjoy the simple moments together; treasure all the laughter; and forgive one another.

Although we have learned a lesson for next NYE, skip the KFC.