Mario is in love with his beyblades lately. He’s dying to buy Japanese ones on eBay. But he has little to no money in his wallet. So he decides to clean his room, Maria’s room and the bathroom to earn some money. Granted however, he does not tell Jon or me about this  decision so we did not set any price we’d pay for him to do these chores. And Maria never did either.

He finishes “cleaning” Ri’s room, which entails throwing her clothes in random drawers and tossing random objects on the ground onto her bed. I think his mantra is “if the floor is clean, the room is clean.” He walks downstairs and informs Ri that he cleaned her room and she needed to pay him. She casually finds her wallet and whips out a $20 bill to give him. This all happens while Jon and I are at work.

When we come home, we hear what happened. Mario now assumes because of Ri’s ridiculous generosity that he is going to score serious cash from me and Jon for cleaning two rooms. Wrong. He’s deflated when we tell him we may give him $1 for his efforts. Ri comes to his side advocating about what a thorough cleaning job he did.

Patty came in town to watch M&M while we went to Cancun last week. She lost her phone the day before her arrival and she was upset she’d have to buy a new one. While she was taking Ri to school one morning, Ri found Patty’s phone hidden in the car seat. Patty was so relieved. She offered Ri $5 for finding it. Ri’s response: “you keep it Grandma for when we go to the lake this Summer.” Mario later found out Patty offered $5 to Ri. His response: “What?! I didn’t have a chance to try to find it in Grandma’s car and get $5. Not fair!”

Jon and I arrived home from Cancun. We had bought a couple of drinks at the airport and I had gotten two Mexican coins back from the cashier. I slipped them in my pocket without looking at them. As Ri and Mario opened the last of their souvenir gifts, I remembered the coins. I took them out and handed one to Ri and one to Mario. Ri looked at it and said “cool, a $5 coin.” Mario looked at his and said “wait, mine is only $1.” Ri looked at me with a concerned look. She immediately handed her $5 coin to Mario and told him she’d trade. I stopped her arm from reaching his hand. But he had already rejected her offer. It’s like he innately knew there wasn’t anything he was going to do with pesos here in the US so why use his good will on that exchange with Ri. Or, for all I know, he innately knew that $5 pesos wasn’t even worth $1 in US currency so why bother. It would not surprise me a bit. 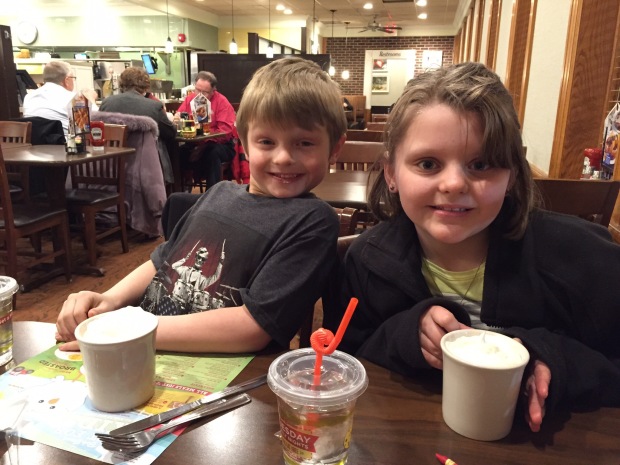