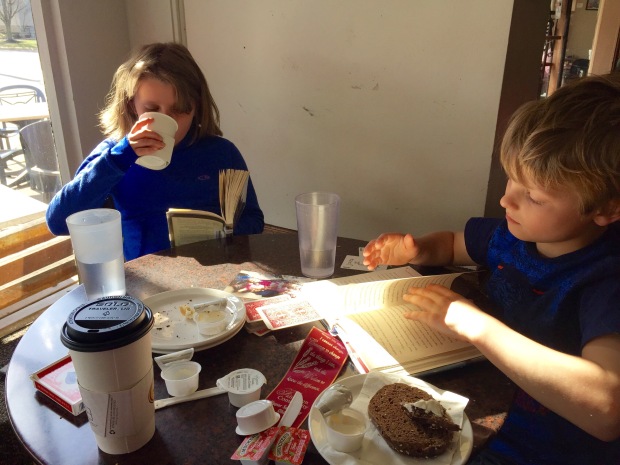 I do this often nowadays. Absorb the wonder of a moment. This absorption thankfully developed after many years of doing the opposite. Failing to take in the beauty of a child entranced in a book or the daydream being pondered as a bite is taken out of a warm Black Russian bagel slathered in cream cheese.

Mario clasped my hand as we walked down 1st Avenue talking about the latest video games on the market. He held it nearly all the way to Stauf’s. Ri pointed out all the squirrels scurrying around and commented that they “are taking over the world.” We all laughed at the thought of squirrel domination. The both of them desperately tried to find a bunny rabbit since I told them repeatedly that I just wanted to see one bunny on Easter.

We walked into Stauf’s and Ri was excited to find a high table with three bar stools. I ordered their bagels while they began to read their books. Ri had only 23 pages left of The Miraculous Journey of Edward Tulane. She was intent on finishing it. Mario had taken pride in reading one page of his book in three minutes time so I used that as a means to get him to read 7 pages. “It would take you 21 minutes but I bet you could do it in 20.” He was not fooled by this dare to make him read more. He had already found the deck of playing cards and wanted to play War. “After you read, dude-man,” I told him.  He sighed and turned his eyes towards the words on the page.

What a delight to watch your children performing a task so intently. I recalled the days when Mario was in a high chair and I fed him little pieces of bagel dipped in cream cheese so he wouldn’t choke. And Ri roamed around Stauf’s gravitating to the old phone booth to act like she was calling someone. The cliche is so true – time really does fly.

But soaking up these moments helps anchor me to the now, and although time is flying,  I’m at least soaring with it.

Ri finishes her book. She excitedly describes the end to me and I can feel the pride she feels in finishing another book. Mario continues to read through the end of his page and I break out the cards.

Mario has all the Aces but then loses three of them to Ri after a war. He laughs and bangs his head on the table trying to get us to laugh, too. It works. People walk by and smile. We all pick up our next card and turn it over. A two, three and a four. Although not inherently funny, we all start cracking up again.