If only every night could be as delightful as last Wednesday evening. I came home from work and both kids had finished their homework. They asked if we could make pancakes and eggs for dinner. Ri wanted to make the eggs and Mario, the pancakes. Right out of the bat, no fighting over who makes what. Yes!

Ri found some ham in the refrigerator drawer and asked if we could fry up some ham with her eggs. She started frying the ham, and the smell emanated throughout the kitchen. Mario looked over at her as he poured the pancake mix and said “that ham smells great Maria!”

She thanked him and brought a slice over for him to eat. “You need your protein”, she said. He laughed and gobbled it down.   Ri asked how he wanted his eggs cooked. They debated on which would be better – sunny side up or over medium. Mario left it to Maria to decide. Maria then asked if he wanted cheese on his eggs and he replied “whatever you want to give me Maria!” Was I dropped in a fantasy world?!

Mario continued to stir his pancake batter, and was anxious to put the batter on the skillet.  We got the chocolate chips, the cornflakes, and the bananas. Maria likes corn flakes, Mario likes chocolate chips, and I like bananas. Mario asked me to pour the batter on the skillet but he wanted to flip the pancakes. It took a while for them to cook. He kept placing his spatula under a pancake trying to flip it but it was still not cooked enough to flip over. I turned away to wash a dish in the sink and I heard a yell of “Mom!” Mario flipped the pancake when it was still raw and the batter fell halfway off the skillet onto the stove. He was mad at himself. Maria quickly jumped in and provided her pancake war story.

“Mario,  the first time I made pancakes I flipped the pancakes so hard the batter hit the top of the ceiling and then some came back down and landed all over the floor. So you are doing so much better than I did my first time, little brother!”

He smiled, shook his head in comraderie with Ri, and continued on with his next pancake. 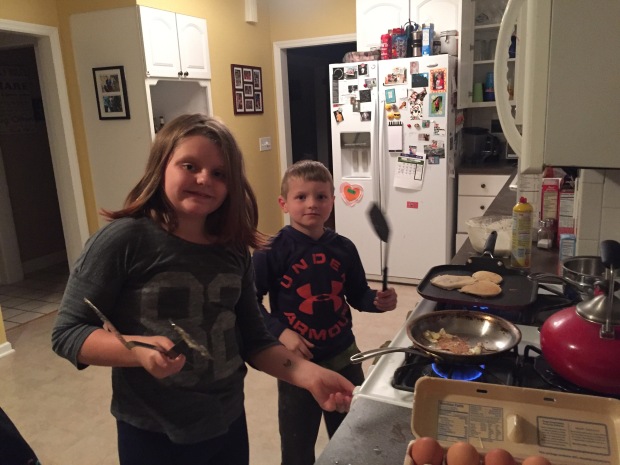 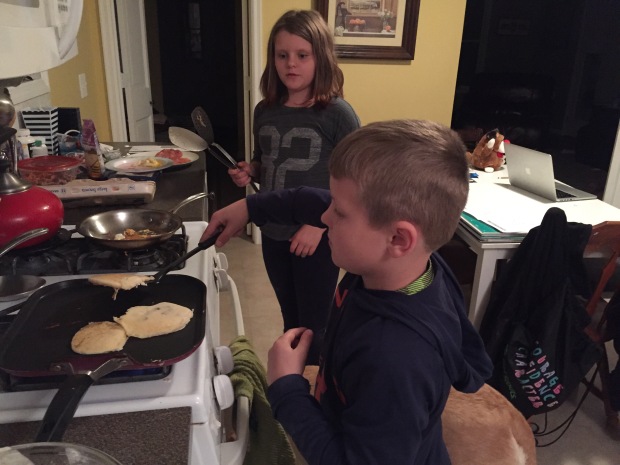 The next batch he made were flipped perfectly. He got a plate for Ri and asked her to try one he made for her with a bold combination of chocolate chips and corn flakes.

“This is superb! It’s ten times better than mom’s pancakes!”

Yes, she gave me a huge grin right after she muttered those words. Then she blurted out a back-handed compliment to me: “It’s ok mom, you are much better with food that’s cooked in the microwave.” Obnoxious… but I couldn’t argue with that observation.

Mario finished up his pancakes and Ri scraped out her final egg from the skillet. We sat at the table and talked about school work, teachers, and spring break. 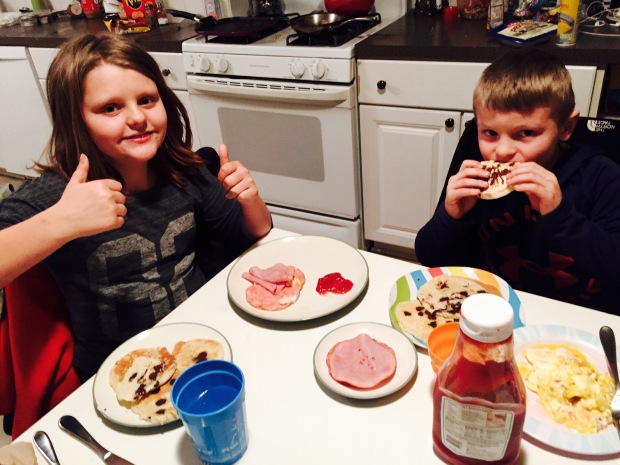 Then, to top off the fabulous meal, Mario found the last episode of blackish on demand. He’d been checking every night for me since I had mentioned wanting to see it after hearing how great it was on the topic of race in America. We all sat down in the family room and watched the show together. And to make Mario’s night complete, we  wrestled during the commercials.